Posted at 12:44h in Campus Happenings by ddodds 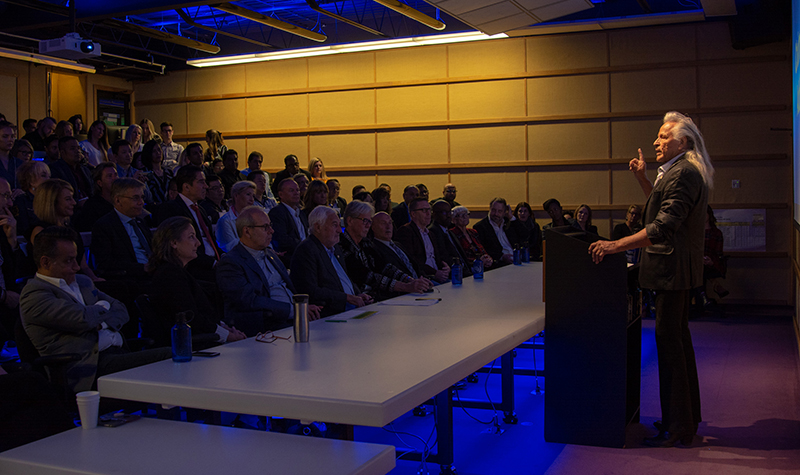 Editor’s note: After graduating from the University of North Dakota in 1964, Peter Nygård wasted little time in putting his business degree to use.

He borrowed $8,000 in 1967, then used that money plus his savings to buy a 20-percent share of a small manufacturer of women’s apparel.

Within a few years, Nygård owned the company. He transformed it into Nygård International, a company that today boasts studios and stores throughout North America and Asia and is one of the largest women’s clothing manufacturers and suppliers in the world.

The son of Finnish immigrants of modest means, Nygård rose to the status of visionary in the clothing industry.

In the late 1960s and early 1970s, he was among the first entrepreneurs to set up sourcing channels in Asia, while also growing his company’s footprint in Canada.

The following decade, while expanding into the United States, Nygård International turned to computers — investing $16 million — to simplify its approach to manufacturing. At the time, paper reigned as the standard method of record-keeping.

And besides being a savvy businessman, Nygård proved a shrewd diplomat. After penning a strategic position paper in 1982, he earned the chairmanship of an advisory committee on Canada’s industrial strategy. From that platform, he advocated for a free trade agreement with the U.S., a position that would eventually result in the North American Free Trade Agreement (NAFTA).

In the decades since, Nygård has made his mark on a slate of industry groups and international endeavors, such as the Canada–USSR Business Council. He also ventured into philanthropy, supporting and donating to nonprofits and research institutions focused on healthy living and cancer treatments.

In 2013, Nygård’s charitable efforts earned him a Queen’s Diamond Jubilee Medal, which honors “significant contributions and achievements by Canadians.” Meanwhile, his business and leadership skills also have garnered a number of industry awards.

Throughout his career, Nygård seems to have followed a dictum that now graces his company’s website: “You don’t know how far you can go until you push the limits.”

So far, Nygård has gone strong for 50 years. In the wake of this 50-year professional anniversary, UND Today caught up with Nygård to talk about his alma mater and his experiences on the road to fame.

My cousins, who lived in Hibbing, Minn., invited me to come to the junior college there, which I attended for about a year. One day, as I was driving back to Winnipeg, I drove through Grand Forks and through the campus of UND, and I fell in love with it.

So the following year, I decided that it was the University for me.

How did UND and the relationships you formed here prepare you for your career in fashion?

The University prepared me for my fashion career not as a designer, but in the business of fashion. It is fundamental to have a very good background in accounting, business law, marketing, economics, statistics. All of the courses that I took at UND were instrumental in understanding the fashion industry from the business point of view.

The most important relationship I had at UND was with the dean of the College of Business and Public Administration, Mr. Thomas Clifford. Ultimately, he became the president of UND and one of my mentors for my life.

Attending UND was something I had dreamed about when I was in Winnipeg. I never realized how phenomenal college life really could be. I was in awe of UND.

Do you have any memorable stories from your time at UND?

Fraternity life is unique; but for some reason, I resisted the normal social fraternities (even though I was very social), and instead I joined a business fraternity, Delta Sigma Pi. Having joined it, I also became the president of the fraternity, and as the president, scored the highest award in all of North America. Our chapter became the No. 1 Chapter in the United States (there were 52 chapters altogether), and as a result, I won the award from the national convention.

Did you have a favorite class at UND?

My favorite classes were all that pertained to business, including economics, business law and marketing. I found the business curriculum to be outstanding, and I excelled in it. The amount of information I was absorbing was challenging to me, and the further I went in the school, the better I got in class. I eventually became almost a straight-A student in my last year.

What is the most important lesson you learned at UND?

The most important lesson I learned at UND was realizing that my future life was not going to be only about sports. Instead, I focused on and prepared myself for the business world.

Somehow at UND, I developed a vision of my future, and I prepared myself for my next stage in life. I learned to study, focus and be committed.

What inspires me is my love for building and for creating. A day I don’t do something new and constructive is a failed day for me, even if it’s just planting a tree. I get my “high” from being creative.

What are you most proud of professionally?

I’m most proud of the fact that I have always done every job better than the next guy. I was the best sweeper in our grocery stores, I was the best stocker of the shelves, and so on.

I must say that I can’t remember ever really having failed at anything. I’ve had setbacks but not failures. I always seemed to have been able to excel and rise to the top in whatever I undertook.

I think the biggest issue to be proud of is that I’m still in the business after 50 years, and I still feel like I’m just starting.

What do you think is the biggest challenge of our time?

The biggest challenge of our time is not to get ruined in our own richness, not to become complacent and take this wonderful life we live for granted.

What existential questions do you wish you had an answer to?

The existential question that overwhelms me is the complexity of the human body – the human life. The more I learn about it, the more I realize how little I know. Why we must die, how can we stop aging, what is the vaccine against aging – these are all questions I wish I had the answer to.

What advice would you give to current students?

That the schooling just prepares you.