Posted at 16:27h in Campus Happenings, Student by mlinnell 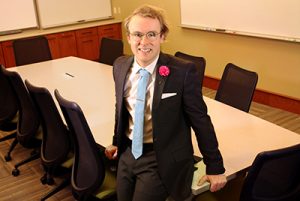 Garrett Weishaar isn’t preoccupied with accolades when it comes to the Minot-native being the first-ever graduate with an entrepreneurship degree at Minot State University.

Maybe just a statue in front of Old Main.

“I joked about it with the other marketing majors that I told Dr. Mays (Minot State assistant professor of entrepreneurship/management Tracey Mays) I wanted a statue in front of the building or at least a plaque in the hallway,” he joked. “But, honestly, it’s been a source of pride. I hope I’m able to help build something bigger than myself and hopefully people will look back and see that guy who created all these businesses and great things, he was the first one to earn this degree at our school.”

Weishaar hopes to emulate both his parents and grandparents, who are still coming up with new venture ideas, as entrepreneurs. He is well on his way to creating those businesses as the newly developed degree in entrepreneurship focuses on starting and building businesses. It was those intangibles that led the already double major to seek one more semester and a third degree from Minot State.

“When I started in the business department, I went into management. After taking some classes, I liked marketing more, so I worked on that — it became my focus,” he said. “In the end, I moved to entrepreneurship and focused on that. It wasn’t a hard decision to come back for the extra semester because I’ve always wanted to own my own business. I viewed getting the entrepreneurship degree as a step in the ladder.”

Mays is impressed with her first graduate in the degree, believing Weishaar has what it takes to become successful.

“Garrett is a phenomenal student. He will make a great leader and entrepreneur,” she said. “He represents what we are about (at Minot State). He has taken the opportunities Minot State offered such as internships, additional out-of-class projects, and learning opportunities and made the most out of them. He was seen, he was heard, and now it’s time for the world to see that he belongs.”

Two projects that Mays offered in the degree in particular stick out for Weishaar.

“One of them was creating a business from the ground up,” he said. “As a group — there were four of us — the project was to think of a business and start it. We worked on all aspects, legal, marketing, website development, financial, and had to present it to investors.

“The second was a marketing strategy for a local franchise owner and I was able to develop a nine-month marketing strategy for the local Papa John’s owner. He was opening a store in Dickinson so it really worked out for me to see the whole operation from buying a building, opening a new store, seeing the early financial reports, I got to see it done the right way.”

Weishaar earned his double major in management and marketing in the fall of 2017. As the University was moving towards an entrepreneurship degree, he first became interested in the certificate. Just a couple weeks before graduating with his first two degrees, Minot State finalized the new degree and gave him the opportunity to earn a third.

“After Dr. Mays told me about the certificate, I knew it was going to just be a couple extra classes to get that and some of them were overlapping with what I was doing,” he said. “I got that and then found out I needed just a couple more to get the degree.

“I always thought that entrepreneurship was just something you eventually learned by doing. You went to college to learn about marketing or management, but once you got into the real world, you became an entrepreneur. But in this degree, you are able to start that same business and go into the field, just in a safe environment. If you fail, you aren’t losing lots of money or your house or whatever. You are getting graded and can see what works and what doesn’t. It was an excellent environment to learn.”