U.S. Secretary of the Air Force, The Hon. Heather Wilson, to deliver UND Spring Commencement address in May

23 Mar U.S. Secretary of the Air Force, The Hon. Heather Wilson, to deliver UND Spring Commencement address in May

Posted at 15:51h in Campus Happenings, Uncategorized by ddodds

University of North Dakota President Mark Kennedy has announced that The Hon. Heather Wilson, U.S. Secretary of the Air Force, has accepted an invitation to deliver the graduation address during general commencement exercises in May. 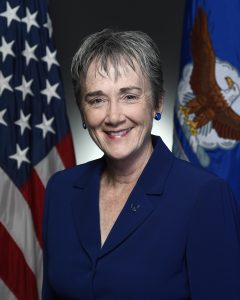 President Donald Trump named Wilson the 24th Secretary of the Air Force in May 2017. She is responsible for the Department of Air Force, including the organizing, training and equipping, and providing for the welfare of 685,000 active-duty, Guard, Reserve and civilian forces as well as their families, according to her official Air Force biography.

“We are elated to have The Honorable Heather Wilson accept our invitation to address the graduates of the University of North Dakota,” Kennedy said. “Secretary Wilson brings with her a decorated background of accomplishments on an array of fronts both in the military and in civilian life. From her days as a pioneering female officer in the Air Force to her time as a Rhodes Scholar at Oxford to 11 years spent as a leader in Congress to her tenure as a university president, Secretary Wilson has always aimed higher in the service of others.”

Secretary Wilson will address UND’s General Commencement exercises set for Saturday, May 11, 2019 at the Alerus Center. There will be a graduate degree ceremony at 9 a.m. that day, followed by an undergraduate ceremony at 1:30 p.m. The Schools of Law and Medicine & Health Sciences will hold their own ceremonies in May, on May 4 and May 12, respectively, at the Chester Fritz Auditorium.

This will not be Wilson’s first time at UND. She was a keynote speaker at the UAS Summit & Expo in August of 2018 at the Alerus Center. She also took time to meet with UND Air Force Reserve Officer Training Corps Cadets on campus, and attended an education roundtable with North Dakota’s congressional delegation, North Dakota University System Chancellor Mark Hagerott and President Kennedy.

It was recently announced that Wilson will be leaving her secretary post soon and returning to academia as the newt president of the University of Texas-El Paso.

In 1998, Wilson became the first female military veteran to be elected to a full term in Congress, where she would serve until 2009.  In Congress, she served on the House Armed Services Committee, the House Permanent Select Committee on Intelligence and the House Energy and Commerce Committee.

President Kennedy, himself a former member of the Congress, served with Wilson in Washington, D.C., from 2001-2007.

Prior to assuming her current position as Secretary of the Air Force, Wilson had been president of the South Dakota School of Mines & Technology, an engineering and science research university in Rapid City, S.D. There, she demonstrated a deep appreciation and respect for university research as a means to innovate, commercialize and diversify regional economies. It’s these very same values that are held in high regard at UND.

Wilson’s appearance at UND also presents great regional interest, as Grand Forks is home to the Grand Forks Air Force Base and its Global Hawk unmanned aircraft mission, and Fargo, just 70 miles south, is the headquarters to the 119th Wing of the Air National Guard.  UND also has a number of Air Force Reserve Officer Training Cadets studying, working and training on campus.

Consistently rated as one of the most military-friendly campuses in the nation, UND has a strategic commitment to the education and wellbeing of military service members, veterans and their families. UND was ranked #9 nationally among all Tier 2 research institutions for its military friendliness in 2019-20 by MiliaryFriendly.com.

Through her acceptance, Wilson resumes a longstanding tradition at UND of having nationally prominent speakers, both alumni and non-alumni, address our spring general commencement graduates.

UND has not had a big name, off-campus speaker deliver a general commencement address since 2013, when Drew Wrigley, a UND alum and former North Dakota lieutenant governor, addressed his alma mater. Former UND President Robert Kelley presided over general commencement ceremonies in 2014 and 2015, followed by then Interim President Ed Schafer in 2016, and then Kennedy in 2016 and 2017.

In the years preceding Wrigley’s address, the commencement dais was graced by a who’s who of UND alums and nationally prominent political figures — sometimes the speakers filled both bills.  Then North Dakota U.S. Sen. Kent Conrad went back to back as commencement speaker in 2006 and 2007; followed by Ed Schafer (alum) as U.S. Secretary of Agriculture under George W. Bush in 2008; North Dakota U.S. Senator in Byron Dorgan (alum) in 2009; and then U.S. Secretary of Homeland Security under President Barack Obama (now President of the University of California) Janet Napolitano in 2010. Senator Conrad spoke again in 2011, followed by Mary Wakefield (alum), then acting U.S. Deputy Secretary of Health and Human Services under President Obama.

It should be mentioned that one of the more memorable non-general commencement addresses came from UND alumna and astronaut Karen Nyberg, who delivered her message from space, aboard the International Space Station, during Summer Commencement exercises in August 2013. Before that, UND’s 2004  graduating class got a taste of history when NASA astronaut Mike Fincke and Russian cosmonaut Gennady Padalka brought them greetings from the International Space Station – a first for any University in the world. NASA Administrator Sean O’Keefe was the main speaker at that commencement. The next year featured then Federal Aviation Administration chief Marion C. Blakey.

More about The Hon. Heather Wilson

Wilson has more than 35 years of professional experience in a range of leadership and management roles in the military, higher education, government and private industry.

From 1989 to 1991, she served on the National Security Council staff as director for defense policy and arms control for President George H.W. Bush during the fall of the Berlin Wall and the collapse of the Warsaw Pact.

From 1991 to 1995, and again from 2009 to 2013, Wilson was in the private sector. In 1991 she founded Keystone International, Inc., a company that did business development and program planning work for the defense and scientific industries. She served as a senior advisor to several national laboratories on matters related to nuclear weapons, non-proliferation, arms control verification, intelligence and the defense industrial base. Wilson also served on the boards of two publicly traded corporations as well as numerous advisory and non-profit boards.

Wilson was an Air Force officer from 1982 to 1989, graduating from the U.S. Air Force Academy in the third class to include women. She would go on to earn her master’s and doctorate degrees as a Rhodes Scholar at Oxford University in England.

Wilson was a collegiate rower at Oxford, and is currently an instrument-rated private pilot.