Posted at 15:19h in Campus Happenings by ddodds 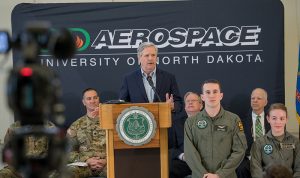 The announcement was made in the James C. Ray Helicopter Hangar, at the UND Aerospace flight support headquarters at Grand Forks International Airport.

Sen. Hoeven, through his work with the National Defense Authorization Act, secured $4 million in appropriations for FY 2019 to bring the once-popular program back to UND.

The Flight Training Program accepts 15 Cadets per year to have their flight training costs covered, providing them valuable experience as they move through their UND education. In bringing the program back, Cadets will now earn degrees in unmanned aircraft systems operations.

This means Cadets can transition into military service with flight experience in fixed-wing, rotary-wing and UAS.

“It’s very uplifting to see a great program like the Flight Training Program return to the University of North Dakota,” Paul Lindseth, dean of the John D. Odegard School of Aerospace Sciences, said. “This has always been a cost-effective way to train future Army aviators, and we thank Sen. Hoeven and his staff for their outstanding support.”

“The shortage of pilots doesn’t just impact the military, but is a nation-wide issue,” Sen. Hoeven said. “That’s why we’ve advanced a variety of innovative approaches to help address this shortage in recent years. The flight training initiative for Army ROTC Cadets is an important part of that work and helps give UND students a leg-up when they graduate and are commissioned as officers. UND is a premiere aerospace and aviation university, and it only makes sense that we would leverage its expertise in resolving this issue.”

In the past, UND Cadets graduating through the program could commission with the Army and transfer to the U.S. Army Aviation Center of Excellence at Ft. Rucker – the premiere Army aviation training center. Their UND training and earned certifications progressed their Ft. Rucker training by months.

“Our helicopter training at UND was founded as a military training program,” Wes Van Dell, chief helicopter flight instructor, said. “The way we designed our course structure aligns with the standards of the U.S. Army. That’s carried on since the program left, and we’re better-suited to handle its return more than ever before.”

“UND is already known as the preeminent aviation school,” he said. “For the Cadets, it’s a great opportunity to be much broader-based aviation students.”