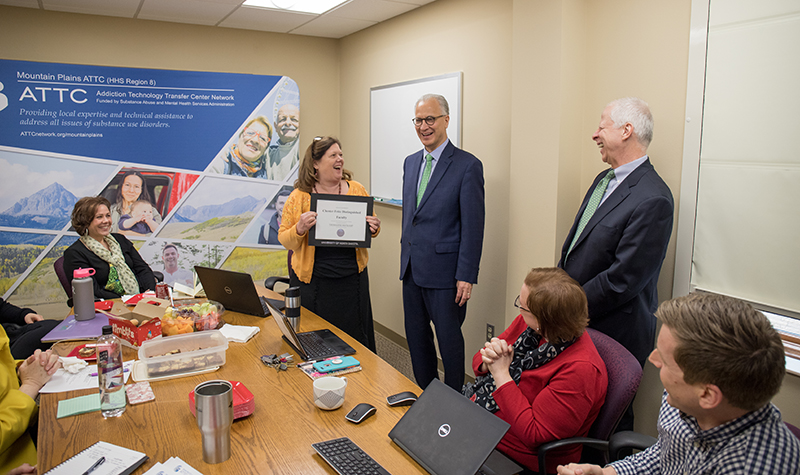 Posted at 19:59h in Campus Happenings by ddodds

Thomasine Heitkamp and her team were in the middle of a teleconference, pursuing progress in their extensive grant work, when President Mark Kennedy and Provost Tom DiLorenzo walked through the door.

Kent Lovelace arrived at the Dean’s Office in Odegard Hall, expecting a meeting about yet another exciting career pathway program for UND’s students.

Both soon realized they were selected for the highest academic honor UND offers its faculty – the Chester Fritz Distinguished Professorship.

In May, they will officially receive the distinction during Spring Commencement proceedings.

Created through an endowment gift from the late UND benefactor Chester Fritz, the distinction carries a $2,000 stipend and the title of “Chester Fritz Distinguished Professor.”

Lovelace was speechless and bowed his head, looking at the certificate, as members of his family entered the other side of the room. They all wanted to support a huge moment for someone who has dedicated his life to UND Aerospace.

“With this award, we talk about being a triple threat: research, teaching and service,” DiLorenzo said. “The Chester Fritz Distinguished Professors do more than that.”

DiLorenzo went on to say that Lovelace is recognized as a face of aviation and aerospace, even beyond the University.

“I… I’m at a loss for words,” Lovelace said to the group of family members and fellow professors. “I don’t think, based on the other people I know who have this award, I’m in that category. That’s my nature, but I appreciate it so much. This is a big surprise.”

“He’s been a mentor not just to me, but to everyone in the department,” Higgins said, then looked to Lovelace. “I completely disagree with your characterization – you’re the quintessential Chester Fritz Distinguished Professor.”

Heitkamp found the intrusion on her meeting the perfect opportunity to introduce the University’s leaders to her Mountain Plains Addiction Technology Transfer Center/Opioid Response Network cohort at the University of Nevada, Reno. Under the grant, Heitkamp is program director for an effort spanning six states to expand addiction support, best practices and applied research in the wake of the opioid epidemic.

“I’m delighted to change my title and pleased to be a Chester Fritz Distinguished faculty,” she remarked. “I want to thank the University for giving me so many opportunities that have been provided through a number of venues. The work we’re doing is very exciting.

“My teaching career has been wonderful here, and it has been a wonderful opportunity to serve the state and engage in the level of science I have, as well as the research I’m doing.”

Diana Kostrzewski, dean of the College of Nursing & Professional Disciplines, remarked that the College was excited and happy to see Heitkamp’s leadership and scholarship recognized.

DiLorenzo said, as with Lovelace, Heitkamp’s work goes above and beyond what qualifies them for the distinguished professorship.

“Her work in the administration and her teamwork… this is it right here,” DiLorenzo said, gesturing at the gathering of faculty both on-campus and on-screen. “We expect our senior professors to be pulling together these teams who work in research and teaching, and the president and I are delighted that you’re one of our next distinguished professors.”

Heitkamp and Lovelace each have nearly 40 years of service at UND under their belts.

Earning his bachelor’s and master’s degrees at UND, in aviation administration and educational studies, respectively, Lovelace joined the Department of Aviation faculty in 1984. By 1994, Lovelace took on the role of department chair – a position he held until 2014 when the professor moved to be director of aviation industry relations.

In that role, he’s negotiated and secured more than a dozen partnership agreements with airlines and aerospace industry leaders. Many of these take the form of pathway programs – allowing students to directly enter the industry and define their career paths as they attend and graduate from the world’s preeminent flight school.

“Kent Lovelace built this place to what it is today, and is so deserving,” said Paul Lindseth, dean of the John D. Odegard School of Aerospace Sciences. “He’s led the aviation department for many years.”

Another point of commendation is Lovelace’s leadership in pilot supply research. He and his research team are in consistent contact with the airline industry, as well as the Department of Defense, to present their up-to-date research on international pilot shortage issues. The University’s enrollment in aviation is hitting all-time highs.

Heitkamp receives her distinguished professorship after 36 years of teaching at the University, in the College of Nursing & Professional Disciplines. She attained full professorship in 2001, and has chaired the social work and graduate nursing departments. From 2013 to 2016, she served as associate provost.

Millions of dollars in grant funding exist at UND through her efforts to combat addiction and support mental health needs across the upper Midwest, and beyond. Within the One UND Strategic Plan, Heitkamp is Grand Challenge Champion for Rural Health and Communities.

Through her research on substance abuse and its impacts, Heitkamp received the 2019 UND Foundation/Thomas J. Clifford Faculty Achievement Award for Excellence in Research, and the 2014 award for Outstanding Faculty Development and Service.

“Professor Thomasine Heitkamp is a scholar, leader and exemplary teacher who cares passionately about her students, her university and her community,” she wrote in support of Heitkamp’s nomination for the award. “Although the primary selection criterion requires ‘significant national or regional recognition in any one of the missions of research, teaching and service, Professor Heitkamp has attained such recognition in all three missions.”

Faculty selected for the honor are nominated through letters by their peers and deans, which are reviewed by a selection committee. The provost and president finalize recommendations made by the committee.