Posted at 15:39h in Campus Happenings by ddodds 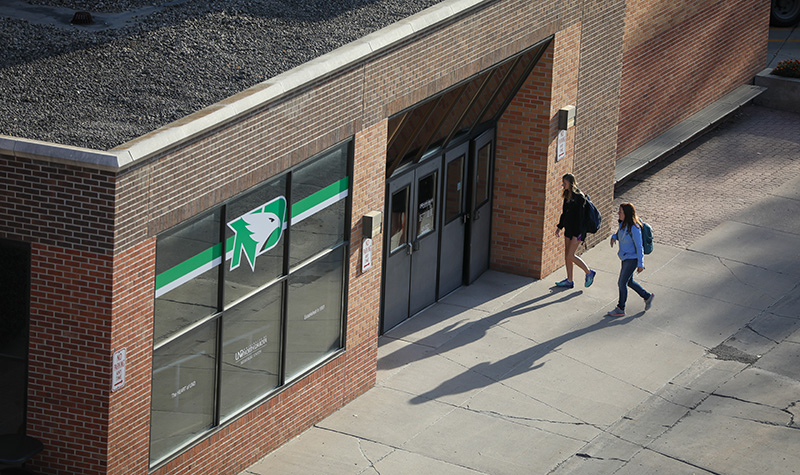 Members of the North Dakota State Board of Higher Education (SBHE) unanimously gave UND the green light to begin razing the existing Memorial Union, a major part of the University’s plans for campus renewal and enhancing the student experience on campus, as early as next week. UND archival photo.

Members of the North Dakota State Board of Higher Education (SBHE) unanimously gave UND the green light to begin razing the existing Memorial Union, a major part of the University’s plans for campus renewal and enhancing the student experience on campus, as early as next week. UND archival photo.

The path to construction of a new University of North Dakota Memorial Union now has a clear starting point.

Members of the North Dakota State Board of Higher Education (SBHE) unanimously gave UND the green light to begin razing the existing Memorial Union as early as next week. The project is a major part of the University’s plans for campus renewal and enhancing the student experience on campus.

Contractors are busy this week, finishing up asbestos abatement work, clearing shrubs and other vegetation around the existing union and making final preparations for demolition.

The SBHE discussed the Memorial Union during a Thursday morning special meeting, in which UND Interim President Joshua Wynne recommended that the project should proceed. His recommendation took place after he had instructed University leaders to review the project, which largely would be supported by an increase in student fees. Wynne wanted options for a revised plan to further reduce the project’s financial impact on students.

“I would like to thank the members of the State Board of Higher Education and Chancellor Hagerott for their careful consideration and approval of the University’s revamped proposal for a new Memorial Union at UND,” Wynne said. “It’s always been important to me that decisions that impact the cost of education for our students satisfy two questions: First, are the decisions in the best interest of our students? Second, are there other options that might help us do more to reduce student debt? Our updated proposal to the SBHE answered those questions by reducing the proposed increase in student fees by 55 percent when compared to the original plan.

“I’d also like to commend UND Vice President for Finance & Administration and COO Jed Shivers, Vice President for Student Affairs & Diversity Cara Halgren, Provost Tom DiLorenzo and others for their efforts in reviewing potential alternative options and identifying additional cost savings for our students. We’ll now set our sights on preparing to raze the existing Memorial Union and commencing with construction.”

President Wynne emphasized to the State Board that the Memorial Union is about students, especially their interaction with other students and faculty to improve their educational experience. He added that “educational experience” is the No. 1 reason why people select their university.

University leaders were able to further reduce the impact of increased student fees for the Memorial Union project by reviewing the need for other existing student fees and making adjustments where appropriate. They also worked closely with UND student leaders to increase the amount that UND’s administration will contribute annually for non-student uses of the new Memorial Union by $250,000. Lastly, the new plan could be helped by better-than-originally-projected interest rates that could further lessen the impact of increased student fees.

Vice President Shivers said some of the focus now shifts to the design phase of the new Memorial Union. University officials will work with student leaders and architects to design a facility that’s practical while serving the needs of modern-day students — and is something students can be proud of.

“We are obviously very pleased and thankful for the State Board’s decision and to President Wynne for his leadership,” Shivers said. “But it’s first and foremost all about our students. Our focus is really always trying to provide students high value as far as the education we deliver and its cost.”

Incoming UND Student Body Gracie Lian also expressed delight in the SBHE’s decision on the Memorial Union. UND student leaders, including Lian’s predecessor Erik Hanson, have been advocating for a new Memorial Union to replace the University’s current student center, which is nearly 60 years old and in need of significant repairs and updating.

“All the people I’ve talked to – they are so excited about a new Memorial Union,” Lian said, following the SBHE’s vote. “They keep asking me, ‘When is this going to happen?’”

Shivers and other University leaders are eager to involve UND students in all of the milestone moments surrounding the retirement of the old structure and evolution of the new.

“The groundbreaking, which I think will take place sometime around Homecoming, will also be a very important,” Shivers said. “We look forwarded to that groundbreaking ceremony. I think that will be a really big moment.”