Posted at 15:23h in Campus Happenings by ddodds 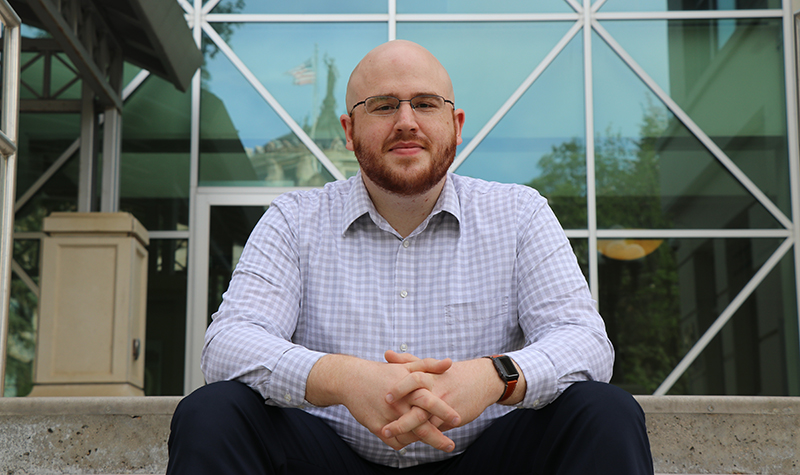 Having earned a master’s degree in Public Health from the University of North Dakota, Michael Dulitz serves as Grand Forks’ first opioid response project coordinator, partaking in a statewide effort to curb the plague of painkillers on communities.

Over the last three years, 10 people have died in Grand Forks County from opioid overdose. While a devastating statistic, experts say this is just the tip of the iceberg. Opioid use in the county has contributed to a 78 percent increase in hepatitis C cases, over 150 overdoses, and, most importantly, countless lives and families devastated.

Michael Dulitz, ’17, has seen the effects of opioid use and overdose firsthand as a paramedic on the front lines. Many days on the job, his eyes were opened to the urgency of care needed for people who use opioids beyond what they were receiving in the emergency room. “A person who had overdosed would be dropped of at the ER, given naloxone, a medication to reverse the opioid overdose, and then be back in the community without the support they needed for overall wellness,” Dulitz explained.

He would often see the same person at the ER time and time again and became determined to take his frustrations and turn them into solutions. “You see a lot of stigma related to substance use. An individual gets one chance and then they are kicked out of a program. They are still a person. The challenge was, ‘how do we build the infrastructure to help those individuals?’”

After earning his master’s degree in Public Health from UND in 2017, Dulitz learned that Grand Forks was one of nine communities to receive the State Targeted Response to the Opioid Crisis Grant from the North Dakota Department of Human Services, Behavioral Health Division. The $180,000 grant, devoted to prevention and treatment, would be used to prevent opioid overdose and deaths, promote long-term recovery and partner with existing efforts for primary prevention. This was a part of Grand Forks Mayor Michael Brown’s 2017 Call to Action on Addiction and Substance Abuse.

With his undergraduate degree in sociology and master’s in Public Health, along with his frontline experience, Dulitz was equipped with the skillset needed to become Grand Forks Public Health’s first Opioid Response Project Coordinator – a position made possible through the state’s Opioid Crisis Grant.

In the short time since the program began, Dulitz and other empowered individuals have changed the horizon of opioid prevention and treatment in the community. “It’s really a three-legged stool of recovery that’s been established. Number one is the medication assisted treatment, followed by counseling and then peer support,” Dulitz said.

In partnering with Spectra Health in Grand Forks, providers have been able to increase access to medication assisted treatment. A next step after an individual’s withdrawals have been stabilized is to provide counseling, in which Grand Forks Public Health has joined forces with Agassiz Associates to provide treatment services to inmates at Grand Forks County Correctional Center. And, finally, F5 Project and Face It Together are two non-profits in the community that provide ongoing peer support for those in recovery.

“One of the most rewarding aspects is seeing the growth in the community addiction infrastructure. Before this grant, we had no medication provided treatment centers. Now we have two. There were no options at the Grand Forks County Correctional Center. The program has now seen 40 people,” Dulitz explained.

In addition, from 2017 to 2018, the year in which opioid response efforts have been in place, there has been a 43 percent decrease in opioid overdoses in the community.

While the statistics are encouraging, Dulitz says his work each day isn’t just about someone being clean, sober or substance free. “We want each life to have meaning. How do we get these individuals healthy so they can become connected in the community? We want to help them to have good relationships, jobs, homes, and to be happy,” Dulitz smiled.