UND helps U.S. get to the moon on time

Posted at 16:00h in Campus Happenings by ddodds 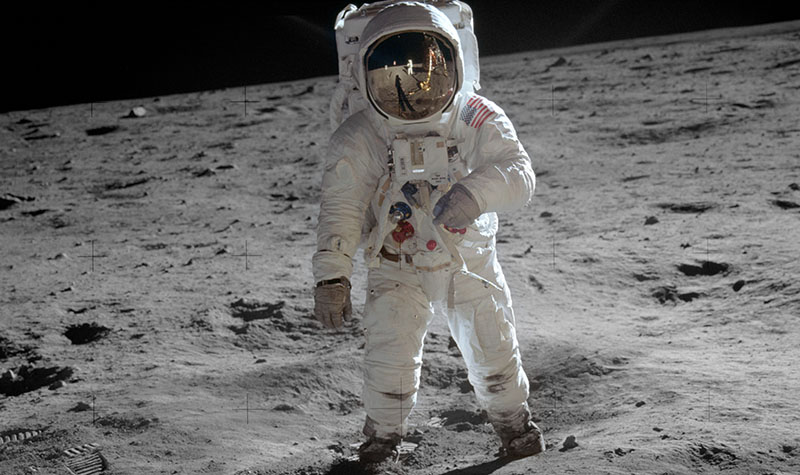 President John J. Kennedy speaks to a joint session of Congress in May 1961. During the speech, he committed the U.S. to a goal of landing on the moon before the end of the 1960s. Photo courtesy NASA.

If not for a critical assessment of NASA’s timeline for landing on the moon—co-authored by a University of North Dakota engineering graduate—the United States probably wouldn’t have celebrated the 50th anniversary of the event in July.

On May 25, 1961, speaking to a joint session of Congress, President John F. Kennedy said, “I believe that this nation should commit itself to achieving the goal, before the decade is out, of landing a man on the moon.” History reveals that UND alum John Disher was a key player in helping NASA meet Kennedy’s goal, which was reached on July 20, 1969, when Apollo astronaut Neil Armstrong became the first person to walk on the moon.

In September 1963, George Mueller, NASA’s newly appointed associate administrator for manned space flight, asked two veteran engineers in his office, Disher and Del Tischler, for their assessment on whether the lunar landing could occur by decade’s end. They concluded that there was only a 10 percent chance, according to the book “Chariots for Apollo: The NASA History of Manned Lunar Spacecraft to 1969.”

NASA documents show that when Mueller had Disher and Tischler brief one of the agency’s top administrators, their findings were so at odds with the official schedule that the administrator asked for the briefing to be withdrawn and all copies of it destroyed. However, the assessment led Mueller to conclude that sticking to NASA’s method of individually testing the three stages of the Saturn rockets used to launch the Apollo spacecraft would cause unnecessary delays in the program.

Rather than continue the stage-by-stage testing NASA had planned for its Saturn launch vehicles, Mueller proposed the “all-up” concept in which all stages of the rockets were received flight ready and tested simultaneously, thus reducing the number of tests to save both time and money. 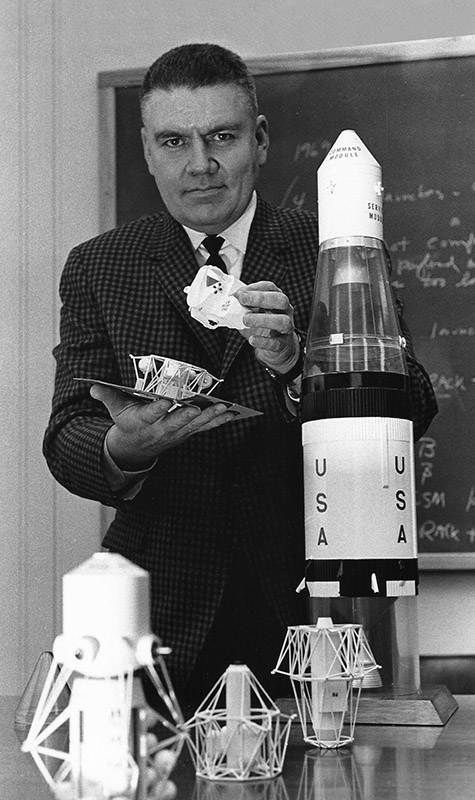 John Disher, a North Dakota native who graduated from UND in 1943 with a mechanical engineering degree, not only helped NASA design and test the Apollo spacecraft, but also made an assessment that led to significant changes in testing to save time and money. Photo courtesy NASA.

Although there was strong resistance within NASA, Mueller’s approach prevailed. Not even famed rocket scientist Wernher von Braun, who designed NASA’s rockets, could provide a valid reason to reject Mueller’s idea. “The ‘all-up’ decision is regarded by many as a key to the United States being able to reach the Moon ‘before the decade is out,” reports “Exploring the Unknown,” a NASA history on the agency’s manned space projects.

Born in Olmstead, N.D., in 1921, Disher attended school in Devils Lake, N.D., and graduated from UND in 1943 with a degree in mechanical engineering. Disher’s son Tom, 64, who runs Disher Sound, a recording studio in San Francisco, said his father grew up working in his grandfather’s auto repair garage in Devils Lake.

“My dad really got into working on the cars and loved that whole sense of technology and making mechanical things work,” Tom remembered. “He liked to say, ‘Scientists discover things, and engineers make them work.’ He had a practical, down-home North Dakota way of seeing how things work and an ability to look outside of the box and come up with solutions.”

Disher worked his way through college with a job in the cafeteria of his UND fraternity. “He had some great professors at UND who took a real interest in who he was and believed in him,” Tom said.

Unable to join the military during World War II because of a childhood injury, Disher went to work as an aeronautical research analyst in Cleveland, Ohio, for the National Advisory Committee for Aeronautics, which in 1958 became the National Aeronautics and Space Administration (NASA).

Tom said his father’s specialty was fluid dynamics, which translated well to the field of aircraft design. One of John Disher’s early projects for the government was designing an aircraft powered by ramjet technology. When NASA was formed, Disher moved to its headquarters in Bethesda, Md., where he was part of the Mercury, Gemini and Apollo manned space flight programs.

Disher’s value to NASA was an ability to connect unusual and often unrelated ideas to come up with a solution, according to his son. “It was pure genius,” Tom recalled. “It was the same process, whether it was figuring out how to fix a dishwasher or doing something in space that had never been done before.”

When Tom Disher was in grade school, his father came to visit the class. “One kid’s dad was a plumber, and another’s was a pharmacist,” Tom recalled. “My dad was sending someone to the moon.”

The importance of his father’s role in NASA’s Apollo space program didn’t really sink in until Tom was 14 and the moon landing became a reality. In July 1969, Disher, his wife Lillian and sons Tom and James drove down to Cape Canaveral in Florida to see the launch of the lunar mission. The moon landing took place while they were driving back to Maryland. The family stopped for three hours in North Carolina and rented a motel room with a color TV, just to watch coverage of the landing.

“Dad was in heaven,” Tom recalled of that day. “Everything went perfectly; he was so excited. My mom and him were hugging each other, and he was hugging us.”

After Apollo, Disher went on to become deputy director of NASA’s Skylab program—America’s first space station launched in 1973—and then its director of advanced manned space flight programs. Following his retirement from NASA in 1980, Disher formed his own company, Avanti Systems, and became an aerospace consultant. UND presented him with the Sioux Award in 1974, and he served on the UND School of Engineering and Mines Advisory Council from 1986 until his death in 1988.

The number of honors Disher received from NASA and other organizations are an indicator of the high regard in which he was held. The awards included the Collier Trophy for his work with the Skylab program, an honor presented annually by the National Aeronautic Association for the greatest U.S. achievement in aeronautics or astronautics. Disher also received two NASA Exceptional Service medals, one in 1969 and the other in 1980.

Tom said his father’s experience shows that it doesn’t matter where you come from or how you get your start in life.

“He worked hard for what he believed in as a teenager and as a college student,” he said. “He had that ‘can-do’ attitude. He didn’t always have a solution right away, but he was always confident that he’d find one. He figured stuff out. He was a problem solver. He was patient and wouldn’t give up. He called upon everything he knew, sometimes in different ways. It’s such an amazing lesson.”

The Department of Special Collections at UND’s Chester Fritz Library houses the Disher Papers, donated by the Disher family. Opening the collection’s cardboard boxes is like opening a time capsule devoted to NASA’s manned space programs. There are declassified reports from the Apollo program and notebooks containing Disher’s notes on everything from his weekly travel expenses to selecting a major aerospace company to build a key component for the Apollo spacecraft. There’s a badge he wore for an Apollo launch and hand-drawn charts and graphs on acetate slides displayed using overhead projectors – the PowerPoint presentations of the time.

Among the papers is a transcript of a 1964 interview Disher did with NBC correspondent Peter Hackes. Five years before the lunar landing occurred, Disher told Hackes it would happen on the moon’s Sea of Tranquility around the middle of 1969, both of which proved correct. In a 1971 note to Hackes, Disher wrote, “It turned out that our dialog was reasonably prophetic, and I guess there is nothing in the interview that I would change today.”

The Disher Papers shed light on the sheer magnitude and complexity of the Apollo program in the age before digitization, the internet and computer desktop workstations. One can’t help but wonder how Disher and his NASA colleagues—their belt holsters carrying slide rules—managed to accomplish the enormous undertaking required to win the race to the moon.

“For every single person who set foot on the moon, there are thousands of people behind the scenes who engineered the rockets that got them up there, tested the space suits and made sure the navigation worked,” said Curt Hanson, head of UND’s special collections.

“It’s natural that the people who actually set foot on the moon get most of the attention, but without people like John Disher, there’s no Neil Armstrong.”

Hanson believes that UND’s Disher Papers could be an important resource for historians researching the history of NASA’s manned space program.

“It’s our users who bring value to what we have when they say, ‘This is important for my research,’ he explained. “Truly, the Disher Papers offer so much from so many different aspects of not only various projects—Gemini, Apollo, Skylab—but also the nitty gritty details of those projects. There’s no limit to how a creative scholar or researcher could use this collection.”