Posted at 15:45h in Campus Happenings by ddodds

After overcoming life’s adversities, Amy Joshua climbs the ladder of the nursing profession 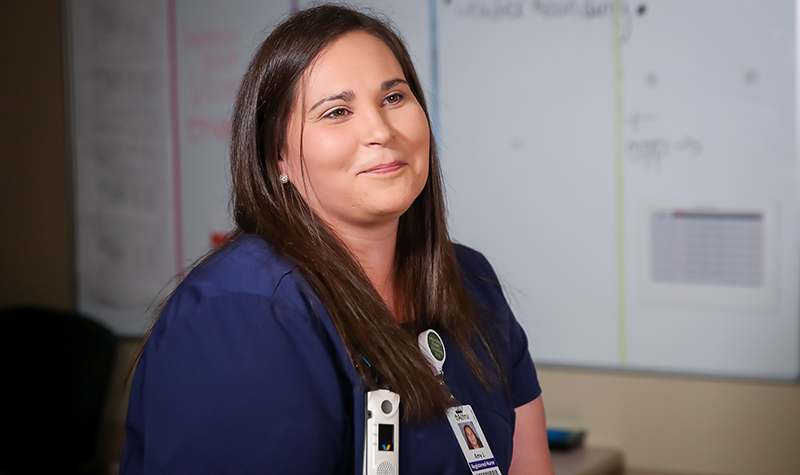 Graduating this summer with a bachelor’s degree in nursing, Amy Joshua has stayed firm on her career path even when life served obstacles. Photo by Shawna Schill/UND Today.

Amy Joshua is meticulous about lists.

They anchor her busy days, which are filled with school, family and work activities. And if a list was to summarize Joshua’s life, it might look like this:

Before embarking on a nursing career, Joshua, armed only with a high-school diploma, found success in the insurance industry, which provided solid pay and regular work hours. But when her duties were shifted to someone in Malaysia, she paused to consider her next step.

Joshua has honed her communication skills, gaining an aptitude crucial for nursing. At one point, having earned a nurse aide certificate, she also cared for people with mental disabilities in a group home.

“I really enjoyed that job and thought that would be something I could do,” she said.

So, she took a chance on college.

But two weeks before signing up for classes, Joshua received devastating news. She had cervical cancer, an ailment that took her mother in 2007 and, later, a cousin.

“My driving force from here on has been to do the most I can with my life while I am here,” Joshua said.

She persisted, even when an academic advisor questioned her decision to stay in school. Three months after her diagnosis, Joshua underwent surgery; and as a result, her cancer went into remission.

In the six years since, Joshua has obtained two associate degrees, becoming the first among five siblings to walk with her graduating class in high school and in college. And last August, Joshua joined Altru Health System in Grand Forks.

But management jobs are hard to get when a person has only an associate degree, Joshua said. “You need your bachelor’s degree for most management jobs. That is why I took the extra step in getting my B.S.N., so that I can advance my career.”

At UND, Joshua found academic support and guidance in the Recruitment & Retention of American Indians into Nursing (RAIN) program. In Spring 2019, after house hunting and establishing a new family routine, Joshua earned a distinction she hopes to maintain: a semester of straight As.

That milestone sparkles even brighter against the backdrop of Joshua’s many duties as a mom, nurse and student.

Her days begin at dawn when she checks her to-do list as well as the whiteboard that holds every family member’s schedule. The boys have soccer and tennis and baseball lessons. Joshua’s fiancé handles the youngsters’ home schooling, while Joshua herself crams three 12-hour shifts at Altru into her week.

Starting at 7 a.m. on those workdays, Joshua checks up on patients, administers medicines, delivers reports to physicians, fulfills orders (such as for CT scans and dialysis) and helps her colleagues.

“I’d love to pick up more days when they need me [at Altru], but right now, it is hard when you have a full-time class schedule,” Joshua said. “Thursday, I’d usually hunker down and do a solid 8 hours [of studying].”

That involves participating in online discussions with UND professors and peers. The curriculum also requires clinical hours, which Joshua fulfills with a project at Altru Safe Kids, an injury prevention initiative in Grand Forks and East Grand Forks.

Another academic obligation is for her to implement a quality improvement plan. For that, Joshua wants to focus on methods to prevent hospital-triggered pressure ulcers.

UND professors and instructors “know that we are working nurses, so they are having us take what we are learning in the class and apply it where we work,” Joshua said.

Taking classes over the summer, she’s already envisioning another goal for her list: