Posted at 12:40h in Campus Happenings by ddodds 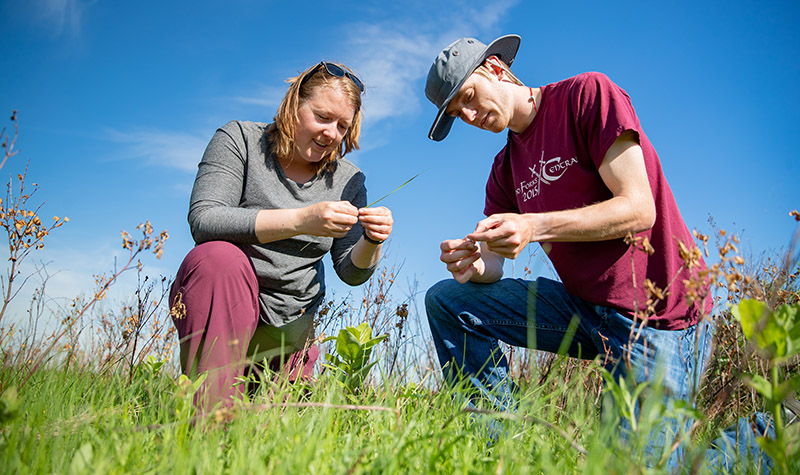 Megan Zopfi, UND biology graduate student, and Aaron Springer, an undergraduate at Valley City State University, study an area of the Oakville Prairie, just west of Grand Forks, that had been subjected to a prescribed burn in June. Photo by Shawn Schill/UND Today.

NEAR EMERADO, N.D. — Rather than thinking of prairie fires as catastrophic events that kill all in their paths, University of North Dakota graduate student Megan Zopfi compares the practice of prescribed burns to giving the prairie a bath — a fire bath.

At the UND’s Oakville Prairie Field Station — a 15-minute drive due west of Grand Forks, N.D. — a group of Department of Biology researchers and students are studying fire ecology at the 1,000-acre area of natural grassland. They want to know what effect prescribed burns have on the soil, the plants, the animals and the genetic resources in the grasslands of the Northern Great Plains of North America.

On June 6, a quarter section of the Oakville Prairie — about 192 acres — was burned for the first time since 2014. UND is studying the effects of the burn in collaboration with North Dakota State University (NDSU) and Valley City State University (VCSU). This area of prairie grasslands in Grand Forks County is managed by the U.S. Fish and Wildlife Service and the North Dakota Game and Fish Department.

The research at UND is of interest internationally, noted Yurkonis, who’ll be presenting the findings of her work at Oakville Prairie during the Eighth World Conference on Ecological Restoration Sept. 24-28 in Cape Town, South Africa.

“We have large swaths of grasslands all over earth — the pampas of South America, the Savanna of Africa, the steppes of Russia and Mongolia,” she said. “What we learn here can apply to all those different places and help people around the world.”

Fire isn’t necessarily an all-destructive force, Yurkonis pointed out. Plants often begin to regrow shortly after a fire. And while grassfires can kill wildlife, small mammals can escape down burrows or find refuge in areas too wet to burn or that fire bypasses.

“Many people hear the word ‘fire’ and think it’s a dangerous thing, and it’s really not,” Yurkonis said. “Where we’re using the fire, we’re using prescriptions. There are certain times we can use fire in a way that benefits the grasslands. We have professional, trained crews to do the burns who follow federal guidelines.”

Zopfi, a native of Marshfield, Wis., is using her background in wildlife management — as well as the instruments she’s developed — to learn more about what happens when a fire is in progress.

“As biologists, we’re really good about studying the vegetation on the landscape before a fire and then coming back afterwards to see what’s happened,” she explained. “But there hasn’t been much about what’s going on in the fire itself, and that’s where my research comes in.”

Aaron Springer, a junior fish-and-wildlife major at VCSU from East Grand Forks, Minn., is spending the summer working with Zopfi to help identify invasive plant species in the burned area. He’s particularly interested in Kentucky bluegrass, which is good for lawns, but not prairie grasslands.

“It’s a resistant grass, and it’s invading the prairies,” he said. “We’re watching to see how it changes after the burn and how it will adapt to grazing.”

Lynda LaFond, a Ph.D. graduate student at UND, is conducting a four-year study on how small mammals respond to prescribed fires. This summer, she plans to begin tracking the movement of these animals through the environment by attaching tracking collars to mice and smaller animals.

“The problem with shrews is they have such a triangular head,” she said. “I think they’ll slip out of a collar. We might have to make them little backpacks.”

Bees and other insect pollinators play a major role in agriculture production and the health of prairie grasslands, but their populations are on the decline. Leslie Yellow Hammer, Valley City, is pursuing her master’s degree at UND. Her research at Oakville focuses on managing the limited habitat in an agricultural-intensive area to bolster pollinator populations.

“I suspect we may find grazed areas or areas that have active management are likely to have more flowers and, therefore, higher pollinator populations and more support for pollinators,” she said. “A lot of the habitat I’ve seen that hasn’t had any management is detrimental because it invites invasive species. Fire is a tool to help with better habitat health.”

Agnes Steele, an environmental studies major from Bismarck, N.D., is helping Zopfi analyze fire data, working in the lab on soil samples and assisting LaFond with her small mammal studies. She said the experience she’s getting is invaluable.

“I’m being shown everything I could have wanted to see in any field that I could possibly want to experience,” Steele said. “I’m getting to see every little piece of an ecosystem and getting to understand in the way it functions hands-on rather than in a classroom looking at a PowerPoint. I’m out here taking samples and watching it change week by week.”

The research at Oakville Prairie has resulted in some unusual discoveries. The white lady slipper flower exists in a few other areas of Grand Forks County, but was recently found for the first time at Oakville Prairie. In addition, a new species of pygmy shrew was discovered there.

Rather than thinking of prairie fires as catastrophes, observers should look at them as natural processes that help maintain the grasslands’ value and integrity, Yurkonis suggested.

“The grasslands are really important,” she said. “They support our pollinators, they help us regulate water and they help us with carbon sequestration. Although there are many services they’re providing to our state, they often they go unappreciated. They’re a resource that’s incredibly valuable.”