Posted at 12:33h in Campus Happenings by ddodds 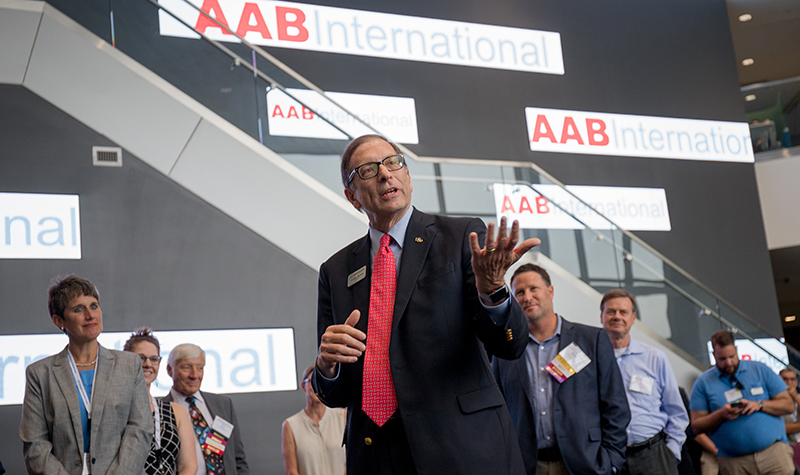 Thirty years ago, a small group of aviation-program administrators from colleges around the country flew in to Grand Forks and met at UND.

It was a turning point in the recognition of aviation as a profession.

Guy Smith, now president of Aviation Accreditation Board International (AABI), was one of the members hosted by John Odegard and his wife, Diane. Smith recalled the couple as gracious hosts; and when Mrs. Odegard saw him last week at an AABI reception at UND, Smith was delighted that she remembered him after so many years.

The Odegard name is one of the many points of pride for the University of North Dakota’s School of Aerospace Sciences, Smith says, as UND was at the forefront of establishing professional accreditation for aviation education programs.

This past week, and for the first time since that formative session decades ago, UND hosted AABI’s annual meeting. AABI members include not only universities but also airlines and aviation associations, among others. With all of them having a say in accreditation, the rigor and responsiveness of aviation education is now a global venture.

And as many within AABI discovered or rediscovered last week, UND maintains its leadership.

“It is important to have rigor in aviation training and academic rigor, as well,” UND Interim President Joshua Wynne said, following Dean Paul Lindseth in welcoming the group Odegard and Smith helped form. “I commend this body for maintaining that, as well as the John D. Odegard School for emphasizing the nexus where they connect.”

Among the first-time visitors to UND was AABI Chairman Gary Morrison, a career airline pilot who transitioned to developing training programs and serving on aviation regulatory boards. “I’ve always known this to be one of our premier college aviation programs, and I’m quite impressed,” Morrison remarked.

“UND has been a leader in innovation, safety programs and aerospace in general.”

AABI accredits individual degree programs — not institutions — through its evaluation process, which starts with an application and proceeds with institutional self-study, a site visit and a report from AABI’s visiting team. Since AABI’s formation, UND has been consistently accredited for all of its aviation-related degrees, from associate to doctoral and from air traffic control to commercial aviation.

“If we could put gold stars on our accreditation, UND would get one,” Smith chuckled.

Drawing more than 100 AABI committee and board members, the meeting at UND represented the primary business of the organization. Committees convened, members networked and panels discussed. Then the week ended with the board making final decisions on first-time applicants, or reaccreditation decisions for existing programs that were due after a five-year period.

“So much of the other work is so important,” Smith said. “Our Industry/Educator Forum is a time when we have two different ideas: in our July meeting, industry tells educators what’s new in an area of the industry, and what should be accentuated by educators; in the February meeting, educators respond to industry.”

While UAS is a big shift for aviation at large, especially within military and law enforcement, Morrison brought the focus more to AABI’s concerns: educating aviation’s future leaders.

“The largest changes in our industry over the last few years come in the technology we use to train, and the training methodologies we use,” Morrison told UND Today. “Just as technology is advancing, our training has to change to better utilize it.” “This is a unique conference,” she said. “The accreditation process involves industry partners and external interests more than most. The decisions and considerations cover the broad spectrum of aviation, from commercial to military, as well as the networking and interactions.”

AABI’s meetings and their networking opportunities find sponsors in major airlines, fellow aviation schools — including UND — and trade associations, such as Women in Aviation and the National Business Aviation Association.

Before the Guidance Committee, which develops methods or improvements to lead new institutions into AABI compliance, Bjerke served as member of the board for nine years. Institutions are allowed only one member to serve in such a capacity; Associate Professor of Aviation Mark Dusenbury now has been in the role for one term, or three years. His second term started last week.

“Technically, I don’t represent UND as a member,” Dusenbury clarified. “I review all accreditation action items before applications get to the executive board, but I’m also on the visiting teams. I’ll go to different places, talk with leaders and faculty, review criteria and ultimately verify AABI compliance.” Dusenbury says he makes one or two site visits per year, and that most board members are on visiting teams. Last week, he helped lead a mock accreditation visit, using UND as the example to prepare new members for upcoming duties. While at UND, participants also were given tours of Cirrus Aircraft, Grand Sky and UND Aerospace, giving AABI a glimpse of Grand Forks’ aviation footprint.

“We’re leaders, and people look to us when it comes to what we’re doing in this arena,” Dusenbury answered when asked about the benefits of UND hosting AABI. “Not out of arrogance, but it’s a chance to showcase UND. It puts a visual to what people have heard about us.”

Bjerke says UND’s place within the national conversation around aviation is important as bodies such as AABI bring educators, industry partners and regulators together.

“We’re addressing the prominent issues within our industry right here, at UND,” she said.