Posted at 12:55h in Campus Happenings by ddodds 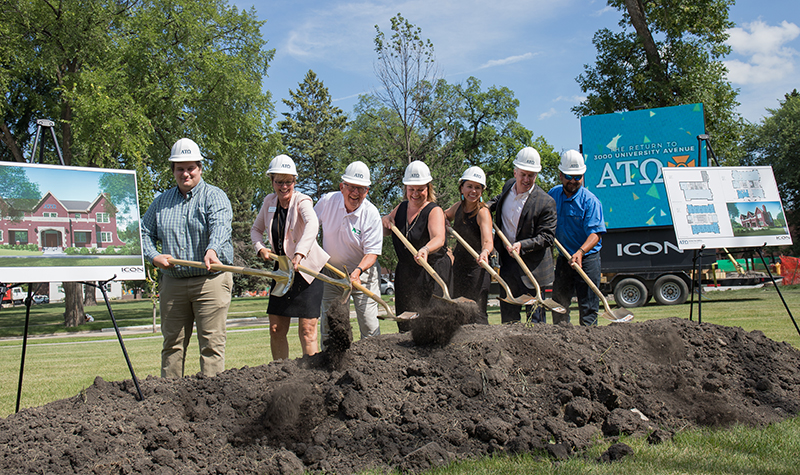 The spirit of fraternity was alive and well last week, as generations of UND alumni and chapter members celebrated the return of Alpha Tau Omega (ATO) to its original site.

In 1922, the house was built in the heart of campus, helping establish a Greek tradition at UND that has stood the test of time. But lingering damage from the 1997 flood caused the house to be demolished in 2007.

Last Wednesday, leaders of ATO and UND broke ground on a spectacular new building, aiming to ensure the chapter’s physical presence for another 100 years.

Scheduled for completion by August 2020, the new ATO house will feature accents aligning it with the Collegiate Gothic architecture of UND while providing top-of-the-line facilities to residents of the Delta Nu Chapter.

Money for completing the project debt-free is being raised by alumni in a three-year fund drive, with more than 85 percent of the construction goal already pledged.

Dick Anderson, a 1962 alum who’s leading the fundraising effort, stood in front of the crowd on a sunny afternoon to declare July 24 a “big day” for ATO at UND.

He emphasized the need to reconnect with alumni who can provide the chapter with leadership, oversight and mentoring. Also, by recruiting “the very best” and keeping in mind representation of students from all backgrounds, Anderson believes ATO can “help mold today’s young men into the responsible, respectful and well-rounded individuals of tomorrow.”

The occasion brought together generations of alumni and longtime friends. Anderson, now living in Fargo, N.D., says “fun things” come to mind when he thinks of the location; ATO was one of the first fraternities built at UND. During his college years, the ATO brotherhood was heavily involved in sports, student governance and a variety of extracurricular activities, Anderson said.

“We had a broomball court out here on the front lawn,” he said, gesturing toward University Avenue, which also is being rebuilt. “Our front porch allowed us a similar look at what was happening in the spring and fall. It was a great location in terms of traffic, being at the center of campus.”

Kate Kvamme, an architect with ICON Architectural Group in Grand Forks and UND Greek alum, reflected on the traditions that will be maintained with the new building — with its front patio and bonfire pit — as well as the features that will make the building fit with UND’s aesthetic.

“UND has a special architecture,” she said. “In studying the facilities on-site, we homed in on three features: the gothic arch at the front entrance, the embattlement parapet above and the cast stone trim around the windows.”

Anderson is pleased with the layout and special features of ATO’s design, as ICON and Columbia, Mo.-based Greek housing specialists Cunningham & Associates balanced aesthetics and functionality. Renders of the future ATO chapter show familiar campus elements such as red brick and off-white stone adorning the exterior.

“As Kate described the entryway, there is an arch corridor that lets you look through the house,” Anderson said. “At the other end is the dining room. You can see through the entire first floor. It’s spectacular.”

A special guest speaker at the groundbreaking was Wynn Smiley, CEO of the ATO national fraternity. It’s not as common these days to build a new chapter, he said, which made Wednesday a “very special occasion.” Smiley was happy to see alumni dedicated to ensuring ATO’s presence at UND for an extended future.

In 2013, six years after the house’s demolition, ATO’s Delta Nu Chapter regained its national charter; but the fraternity has lacked a permanent, consistent home. Current chapter president Eric Kolb says they’ve tried everything from meeting in the Memorial Union to leasing the former Pi Kappa Phi house up the street.

The new version of ATO will be the first fraternity house built on campus since Pi Kappa Alpha’s rebuild in 2004.

“As is always the case, brotherhood is all about making friends,” ATO CEO Smiley remarked after taking up a shovel with Kolb and other project leaders. “So the house becomes even more important when someone is initiated in the chapter, and they have a place to live.

“It also doesn’t hurt in recruiting to say, ‘Hey, you can live in this beautiful house.’”

Because of what alumni and current chapter members have done, many future generations will have the opportunity to be ATOs at UND, he said. Fraternities across the country provide a home away from home, as well as the chance to become stronger community members, leaders and family members.

Current ATO members have been working with the design team, and the announcement of the project getting underway lifted the collective spirits of the brotherhood, Kolb said. It has made a big difference in the atmosphere around ATO.

“Having a permanent place on campus where ATO once stood makes all of our current members, and alumni who worked toward this, happy and proud to call it home,” he said. “The work that we do, combined with our house, will create a positive image people can associate with our fraternity.”

Gerhardt, working closely with student organizations across campus, recognizes the new house as a living-learning environment that can be as important to students’ personal growth and development as is a classroom.

“It provides the space students need to develop and grow not only as individuals, but as organizations seeking to support other students and enhance students’ UND experiences,” she said.