Posted at 12:45h in Campus Happenings by ddodds

NDUS search committee mulls visions for the future, attributes of next UND leader 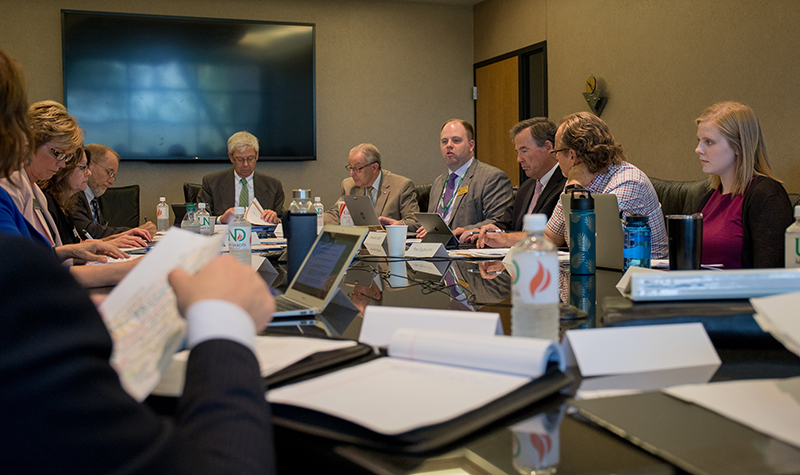 At the inaugural meeting of the presidential search committee, members discussed results of three prior listening sessions and the recruitment process for finding UND’s next leader. Photo by Connor Murphy/UND Today.

That was the message from Mark Hagerott, chancellor of the North Dakota University System, at the inaugural meeting of the presidential search committee on July 24. President Mark Kennedy left UND in June to assume the presidency of the University of Colorado System. Dr. Joshua Wynne, vice president for health affairs and dean of the School of Medicine & Health Sciences, is serving as interim president.

“People are looking to the future,” Hagerott said. “If you look at the key attributes that people want in UND’s next president, you will see words like building, aspiration, growth. We need to adapt to the future and create a vision for UND that’s aligned for the future.”

Hagerott was speaking about the results of three listening sessions conducted by committee co-chairs Dr. Casey Ryan (State Board of Higher Education vice chair, physician and former president of Altru Health System) and Dennis Elbert (former dean of the College of Business & Public Administration).  Around 30 people attended each session, which yielded a seven-page, single-spaced list of attributes that attendees want to see in the next president. That list, along with a “cloud map” of key words from the sessions, was distributed to the committee members. Additional listening sessions will be held with students during the fall semester.

“The idea of servant leadership jumped out,” said Elbert. “People are looking for someone with a passion for UND who will focus on service to the state of North Dakota. There was an emphasis on transparency, trust and integrity. What also stood out was the need for ‘management by walking around.’ What does that mean? To me, it means working with and showing concern for others. People want bold thinking, and that idea of servant leadership really resonated.”

Elbert said that there are good things at UND that people want to continue, especially the One UND Strategic Plan.

“The city of Grand Forks is pleased with their relationship with UND,” Elbert said. “It’s the best it’s been in years, and they find it very worthwhile.”

Elbert also noted that some underlying concerns are not new.

“Some of these issues were present in 2015 during the last presidential search,” he said.

Members of the committee said they had also received a number of comments about the type of person who could best serve UND.

“We’re getting advice from across the galaxy,” Elbert said.

“There has been a lot of reference to the good old days of President Clifford (who served from 1971 to 1992),” said another committee member. “He was a great man, but his style of leadership would not work today. We need to be realistic. Times have changed.”

Committee members noted that Clifford’s powerful personality, people skills and communication ability would be good attributes in UND’s next president.

The committee is charged with bringing three unranked finalists to interview with the State Board of Higher Education.

They listened to a presentation on open records law, learning that meetings are open to the public, but names and documents of all applicants except the finalists are closed. They hope that will allow strong candidates, perhaps including sitting presidents, to apply.

There was some discussion of the position description, which includes a statement that the desired candidate should have a connection to UND and the state. Members agreed to re-word that section to make it more open to applicants from outside the area. There was also some discussion about the desire to have a president who would remain in office for a longer period of time.

“We need someone with ‘staying ability,’ Elbert said. “A president needs a number of years to be effective and make accomplishments.”

“I have friends in their fifth year of school who have had four presidents,” she said. “I want to avoid that for future students. They feel the underlying issues, and it affects them.”

“We are looking for stability,” said Dr. Ryan. “But nothing in the document obligates a president to be here a certain number of years. We can’t do that.” Hagerott noted that a member of the State Board of Higher Education is looking at updating presidential contracts and possibly adding financial penalties for early departures, as well as incentives for longer tenure.

The committee agreed to use AGB Search, a higher education search firm which has done several searches for NDUS, after reviewing bids. They had originally wanted to use a recruiting firm, but it would take more time to send out RFPs to possible vendors than to use an already-approved vendor such as AGB. Instead, they reduced the duties of the firm from 20 to nine, with Ryan and Elbert taking on the additional search duties, including some recruiting. Cost will be $57,530, substantially less than a full search.

The committee hopes to complete its work before July 2020, and has an accelerated timeline but no deadline.

“We want to get the right person, not the quickest,” said a committee member. “There is a sense of urgency, but there is also a lot of confidence in Interim President Wynne.”