NDUS comes together to advance research

Posted at 12:23h in Campus Happenings by ddodds 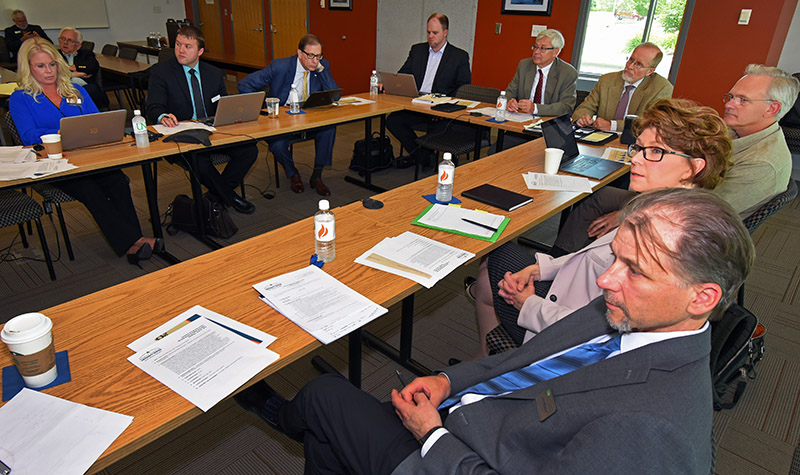 Representatives from UND, NDSU, the State Board of Higher Education and the North Dakota University System held the first meeting of the SBHE Research Committee last week at the UND Tech Accelerator. Photo by Patrick C. Miller/UND today.

Although a major part of the first meeting of the North Dakota State Board of Higher Education (SBHE) Research Committee was getting organized, much of the discussion focused on how university research could garner more support in the state.

The board formed the committee in June to ensure that the SBHE and the North Dakota University System (NDUS) were serving the research needs of the state’s higher education institutions, primarily the University of North Dakota and North Dakota State University. The first research committee meeting was held July 31 at the UND Tech Accelerator.

Committee chair and SBHE board member Casey Ryan noted that after the North Dakota Legislature defeated a bill in the last session to provide more research funding to higher education, the board decided it couldn’t afford to wait two years for another legislative vote.

“I think the opportunity to elevate research is huge,” he said. “I think it’s a great benefit to both NDSU and UND, also to the citizens of the state of North Dakota.”

Committee member Joshua Wynne, UND interim president and dean of the School of Medicine & Health Sciences, used the new $124 million medical school building in Grand Forks as an example of what could be accomplished when North Dakotans viewed the project as an asset to improve their healthcare.

“The support in the Red River Valley is very strong, but when our building came up for a vote, the votes were just as strong out west as they were in the east,” he said. “If we can show the relevance throughout the state, then the next time this comes up for a vote, it’s more likely that the entire state will embrace it.”Committee member Joshua Wynne, UND interim president and dean of the School of Medicine & Health Sciences, related how statewide support helped secure legislative approval of the new medical school. Photo by Patrick C. Miller/UND Today.

Ryan emphasized the need to make progress in addressing research-related issues. “We just don’t meet and talk,” he said. “There has to be change. Things have to move forward, meaning things have to get better. So hopefully, this group will establish goals.”

The committee has 12 duties and policies established by the SBHE that Ryan expects the committee to prioritize in future meetings. He also stressed that any measures passed by the research committee would have to be approved by the full SBHE.

“One of the priorities for higher ed in the state of North Dakota is how to work with two universities and the state Department of Commerce to commercialize research because we think that is an opportunity that’s underutilized,” Ryan said.

The 12-member member committee is comprised of three SBHE members — three each from UND and NDSU, two with the North Dakota University System (NDUS) and one representative for polytechnic and baccalaureate institutions.

“This group is to decide how we’re going to make research better for the two institutions and the other institutions doing research,” Ryan said. “And, hopefully, some of that will be our recommendations as to how we need to work with the legislature and the governor to improve research monies devoted to universities.”

Hagerott said that to gain more legislative support, the committee needs to promote collaboration between universities, develop metrics for accountability and work with the commerce department to commercialize research.

“We need to educate citizens of the state, the legislature and the governor on how important research is and why it needs to be supported,” Ryan added. “We have to be able to speak it so people can understand it.”

Bresciani said that there are few institutions in the 14,000-student range doing as much research as NDSU and UND.

“In one sense, we’re already doing more than most of our peers,” he explained. “Where we’re different than our peers is the very limited state support that’s provided to the institutions. As state legislators start to understand the economic impact our research universities can have on the state, I see our role here as very exciting.”

Wynne agreed with Bresciani and referenced an independent study with data to reinforce the point. It looked at the impact of various research institutions around the U.S. and demonstrated that relatively small universities could have a disproportionately large impact.

“As it turned out, contrary to what I would have expected, the University of North Dakota was surprisingly high on the list, and far surpassed the big-name institutions on the two coasts,” he said. “I was, quite frankly, blown away by this study. Imagine what the return on investment would be if we could amp up that support even more.”