Posted at 12:27h in Campus Happenings by ddodds 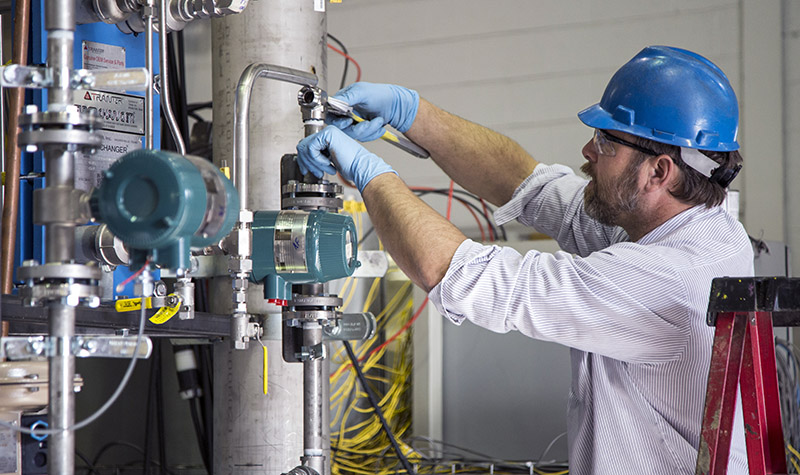 The first contract awards through the new State Energy Research Center (SERC) have researchers at the UND Energy & Environmental Research Center (EERC) hopeful about new technologies they can develop for the state of North Dakota.

“The researchers here are excited to not only think outside the box, but then to actually test their ideas and see where they go to develop new technologies,” said Scott Ayash, EERC assistant director for research management.

Ten projects led by EERC researchers will receive $1.1 million in the first round of funding through the program created by the North Dakota Legislature earlier this year. SERC receives $5 million per biennium to conduct exploratory, transformational and innovative research that advances future energy opportunities to benefit North Dakota’s economy and environment.

Ayash said EERC researchers submitted 26 proposals for consideration, which went through a rigorous review process. Each proposal included a scope of work, timeline and budget. The review teams scored, discussed and debated the pros and cons of each project and how well it fit within the goals of SERC.

“The projects selected cover everything from rare earth elements to electromagnetic pulses that could disrupt electrical transmission on the grid to energy storage,” he said. “They look at better uses for our coal resources and how we can produce more oil in an environmentally friendly way. It really runs the gamut of energy types in North Dakota.”

One EERC project approved for SERC funding will examine the resilience of the power grid to electromagnetic impulses. Photo by Kari Suedel/EERC.The goal of the research, Ayash noted, is not only to produce more energy using North Dakota’s fossil and alternative resources, but also do it in an efficient, cost-effective and environmentally friendly manner.

“The hope is that the technologies developed under the State Energy Research Center can be used in North Dakota 10 to 15 years out,” he explained. “We’re really starting at the fundamental basics of technology development.”

Former EERC CEO Tom Erickson, who became SERC director on Aug. 1, and others spent nearly five years working to provide the Center’s scientists and engineers with critical funding for exploratory, innovative and transformational research. In addition, SERC will also engage in education and outreach activities related to energy resources, as well as provide research assistance to state government when needed.

When the federal government stopped funding directed research at the EERC several years ago, the number of invention disclosures submitted by the Center fell from an average of 15 per year to zero in 2018. But Ayash said the SERC funding should help reverse this trend, creating enthusiasm among EERC researchers.

“This this type of funding at the EERC is unprecedented,” he said. “We’re a contract research facility, and unless we have a client that’s going to pay for research, we don’t get an opportunity to try some of our most exciting ideas. I was very pleased with how many proposals were submitted just in this first round.”

Funding for EERC projects through the SERC enables researchers to pursue innovative, exploratory and transformational research. Photo by Kari Suedel/EERC.