Posted at 12:31h in Campus Happenings by ddodds 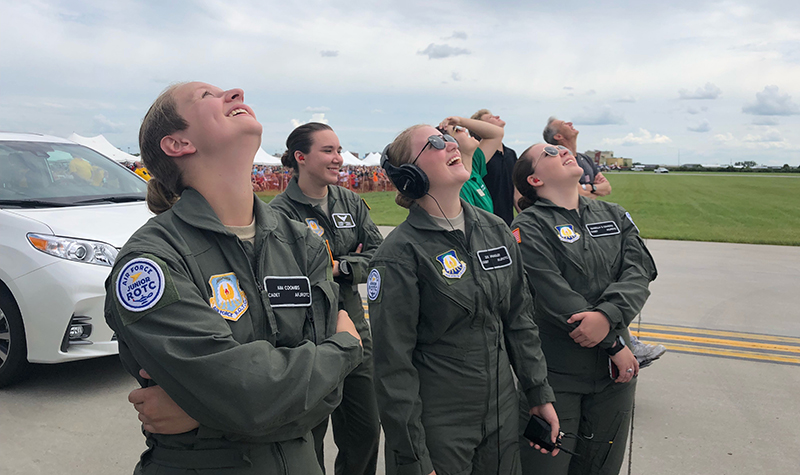 Cadets from this year’s crew of AFJROTC Flight Academy participants look to the skies for the U.S. Air Force Thunderbirds’ routine above the Fargo AirSho. Image courtesy of Beth Bjerke.

Maybe it was the many early mornings she’d spent on the University of North Dakota flight line, or the seven weeks of intensive classroom and cockpit work that were leading her to a private pilot’s license.

All she knew was that somewhere along the line, Tera Smeltzer had felt her enthusiasm for aviation leveling off.

That lit the afterburners. Smeltzer’s interest once again soared.

“They were having fun,” Smeltzer marveled after sitting in on the Thunderbirds’ pre-flight briefing, where the pilots analyzed weather patterns before going out to fly daringly tight patterns.

“It’s something that’s fun for them – it was unreal.”

Not only did they meet members of the renowned air demonstration squad, celebrities in their own right, but also the young cadets got an exclusive listen-in on the Thunderbirds’ in-flight communications.

“You’re looking at the best of the best,” Zachary Kahler, a fellow cadet, said after the experience. “It’s what you could do, hypothetically, with enough practice and dedication.”

Cadets at UND this summer took their first steps toward promising careers in aviation. The AFJROTC Flight Academy, now in its second year, is a highly selective scholarship program placing high-school-aged cadets in flight schools across the country. In eight rapid-fire weeks, cadets complete the flight and ground school training necessary to earn their private pilot’s license.

Cassie Padula, a commercial aviation senior at UND and soon-to-be Air Force pilot, has been their guide and mentor through the experience. With cadets living on campus for the duration of the program, she’s their go-to for transportation around town and on field trips, as well as tours of campus facilities.

She describes the feat of earning the license in two months with words like “ridiculous” and “incredible.”

“It took me 10 months to earn my private pilot’s license,” Padula said. “If I were seven weeks into my training, I wouldn’t be near where they are in their progress.”

Scott Lewis, the Air Force’s deputy director of the JROTC program, spoke at the recent Aviation Accreditation Board International (AABI) meeting on UND’s campus. He had similarly high praise for the cadets as he detailed his program’s impact and the Flight Academy’s rigor.

“This group is beyond amazing,” he said, gesturing toward the cadets in attendance. “They show up on time, they’re prepared. They have the grit to make it through a challenging program. We have a bright future ahead of us, with them.”

It was a moment that instilled confidence and boosted morale, said Kahler, who’s now entering his senior year of high school in Mount Dora, Fla. And it happened at a time that was just as Smeltzer described, in which all of the cadets were feeling the pressures of an intense, condensed program.

Lewis spoke with the group, telling them how the program is developing, why it was created and how well the cadets have been doing in the eyes of the Air Force.

“I hadn’t realized how highly recognized this was,” said Smeltzer, a high school graduate from Phoenix, Ariz. “But hearing from [Lewis] how big of a deal it is and how amazing we’re doing, it’s such an honor to be a part of this program.”

After a successful first year, applications for the program went from 600 to 1,400, Lewis said. Meanwhile, the number of acceptances went up by only 30 from the previous year, from 120 to 150.

It’s an exclusive group of cadets, but Lewis and the Air Force hope to aggressively grow the numbers in coming years, ahead of a looming pilot shortage.

The scholarship is a foot in the door of an aviation career. And with tuition, flight fees and room and board covered, students get an experience that’s hard to beat.

Kahler understood that as he twice applied to the program, getting in on his second attempt. He says both his father and uncle had hoped to be pilots but never had an opportunity like the Flight Academy.

Padula also understands how hard it can be. She didn’t have any flight experience at all before coming to UND from neighboring Minnesota.

“With JROTC, they get the opportunity to discover flight,” she said. “This is giving them the cockpit experience, the solo flying and generally that foot in the door to not just the military, but increasing interest in aviation, in general.

“The first step is always the hardest.”

Having logged more than 30 hours of flight time at UND by the time he visited Fargo, Kahler walked around the AirSho with a new perspective.

“Now I realize what it takes to do all of that,” he remarked, not long after seeing the Thunderbirds prepare and fly. “Seeing the flights and aircraft with wanting to be a pilot in the military makes me think of the possibilities.”

Smeltzer was no stranger to the airshow environment, having grown up in a military household, where her father remains a helicopter pilot. She was an AFJROTC cadet throughout high school, as well as a member of the Civil Air Patrol – the civilian auxiliary of the U.S. Air Force. Through the patrol, she’d accrued around six hours of flight time. After college, she hopes to fly bomber aircraft.

“I had to reinforce and relearn everything,” she said of flying for the first time at UND. “There were things in the airplane I wasn’t comfortable doing, but the more I’ve practiced, the more natural it is.”

It was a bigger leap for Kahler, as he’d only flown only once or twice at a much smaller facility. He was especially impressed with UND’s quality of aircraft, which are maintained by an equally dedicated staff.

“I’d never been on the ramp in an airport setting,” he said. “Hearing the tower, having the headset on, trying to learn what you’re supposed to say: going into it for the first time, it was so different than anything I’ve done before. I couldn’t stop thinking, wow, this is really cool.”