Posted at 12:18h in Campus Happenings by ddodds

President opens up about leadership style, support for One UND Strategic Plan and future of online education 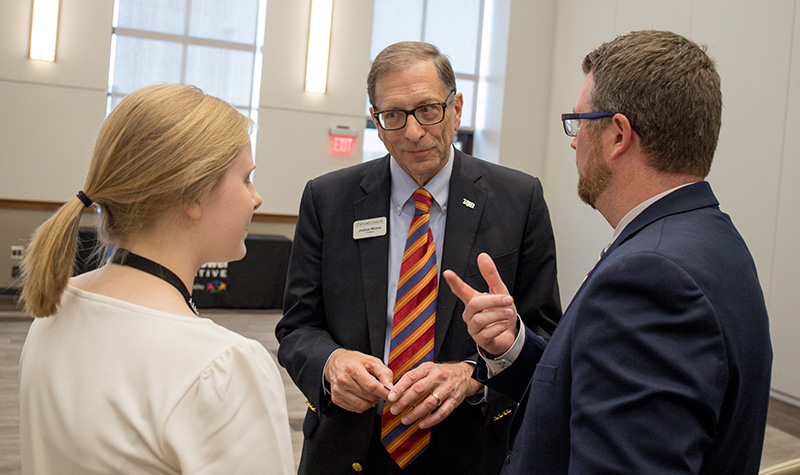 In front of Grand Forks business and community leaders last Tuesday, Wynne proclaimed he relishes discussion and debate. If he’s in a meeting, he wants to hear multiple perspectives, popular or not, on the issues of the day.

“Unpopular ideas are how we work toward the best answers,” he said, inviting members and friends of the Grand Forks Region Economic Development Corp. (EDC) to ask questions and comment on the University’s leadership.

Hosted by Minnkota Power Cooperative, the gathering served as yet another platform for Wynne to clarify his objectives and motivations for his service as UND president on an interim basis. Especially emphasized was his desire to regularly and openly communicate with the area’s business community.

Keith Lund, president and CEO of the EDC, was pleased to hear it.

“It’s very clear that he intends to maintain momentum,” Lund remarked afterward. “He’s not going to be custodial in this role, and he plans to continue making connections within the community.”

It’s important that communication remains consistent, Lund said – that both town and gown understand the issues and work together to address them.

“This event today is an example of how important that is,” he concluded. “Our turnout was fantastic, even on a great summer day like today. It demonstrates the value the community sees in this dialogue.”

Wynne’s invitation to share the floor was met with questions regarding international recruitment, the One UND Strategic Plan and the balance of online and on-campus education.

The UND leader continued to operate from the tagline, “Moving forward, striving for excellence.”

Concerning education, research and service to the community, Wynne reiterated that the University’s strategic plan is a solid roadmap. The objective now is to continue progress on the plan’s tenets, which need to be flexible in changing circumstances.

“You have to be able to evolve your plan as conditions change,” he said. “But I think it’s a good roadmap for now, and that’s not just my opinion. That’s what I hear from the community and my colleagues on-campus.”

Prompted by Lund to speak on potential priorities for the strategic plan, Wynne talked about two that were “near and dear” to his heart under former president Mark Kennedy: research and philanthropic support.

First, “there has been substantive growth in the appreciation of the importance of research and scholarship in our community, both locally and many places in North Dakota,” he said, bringing up recent legislative considerations for research funding. “I’m quite confident that 10 years ago, that serious discussion would not have occurred.”

Wynne hopes to continue the upward trajectory of research at UND through developing a permanent Vice President for Research & Economic Development, ensuring stability in that division, and working with the State Board of Higher Education’s Research Committee, which met for the first time Wednesday.

Regarding the importance of philanthropic support, Wynne cited medical school successes in mitigating student debt. UND’s School of Medicine & Health Sciences has been able to buck the trends of rising financial burden by having “skin in the game” with donors, as well as “generous support” from the Legislature. One key program, RuralMed, pays students’ tuition in return for the students practicing for five years in rural North Dakota.

“A fact I’ve learned is that many [undergraduate] students graduate with no debt,” Wynne said. “On the other hand, trying to increase support of scholarships is important for kids who don’t think they have the resources to go to college. Then those who do come from rural areas or less-well-off families won’t be saddled with debt.”

Grand Forks County Administrator Tom Ford followed Wynne’s points on financial burden by bringing up UND’s goal of leading in online education. He expressed concern over the potential conflict between bolstering an online presence and maintaining on-campus growth. Students living in Grand Forks impact the area’s economy, in both workforce and tax revenue.

“If there is one issue that I didn’t appreciate but over the last five weeks have come to understand, this is it, and it’s an essential question that we need to answer moving forward,” Wynne replied.

Wynne cited predictions by Harvard Business School Professor Clay Christensen that half of higher education institutions in the country will be obsolete in the next 10 years – a casualty of the digital revolution.

But in the same body of work, Wynne noted, Christensen found that some of the biggest donations to universities are made for a specific reason: that a particular experience with a professor changed the lives of those in a position to give back.

While online education is less likely to produce those life-altering relationships, it won’t completely supplant the on-campus experience, Wynne said.

“I think we have to work through a hybrid approach,” he said. “Online is an important part of the way we educate students now, and it will continue to be.”

After hearing Wynne’s dialogue with the audience, Grand Forks Chamber President and CEO Barry Wilfahrt concluded that the University is in good hands.

“The fact he said he’s going to be an interim president with an emphasis on president was impressive,” he said, echoing the view that the strategic plan is popular within the business community. “This isn’t a time in any business or organization where you can be in a placeholder role. If you aren’t working hard to move forward, you’re moving backward – it’s critical.

“People who worked with Dr. Wynne on the medical school project, with the Legislature, know he has a track record of success and credibility. The medical school and his programs are two of our strongest successes, and we expect that he’ll transfer that approach to the entire University.”