Posted at 12:34h in Campus Happenings by ddodds 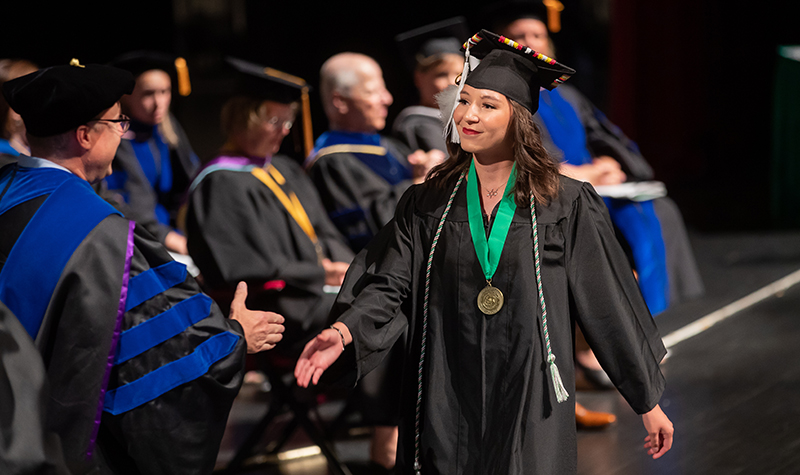 Starting with a rousing version of “Bohemian Rhapsody” and other pop songs by pianist Brent Hermans and ending with the “graduation dance,” UND’s Summer Commencement ceremony had graduates and their families celebrating.

“I want to welcome you into the ancient society of scholars,” said Phil Wisecup, vice chancellor of the North Dakota University System, who officiated the ceremony.

More than 500 students were eligible to receive degrees, and graduate students outnumbered undergraduates as they crossed the stage to receive their diplomas. Distance education students, many of whom watched online, were also recognized as proctor David Tack read their names aloud. More than 3,700 people viewed the ceremony on FaceBook.

Wisecup began the ceremony by asking parents and families who have supported their graduates to stand and be recognized.

“That’s a lot of thanks,” Wisecup said, as most of the audience stood and clapped.

“In my 36 years in the U.S. Navy, I learned how important higher education is,” said the retired vice admiral, who added that the Navy began offering correspondence courses in 1917. “Admiral Chester Nimitz had the U.S. Naval College mail correspondence courses to ships, and officers who gave up their personal time to complete their education were selected for special duties. Nimitz put great stock in the value of higher education.”

UND graduates who have devoted their time to earning their degrees have the tools that permit them to excel for the rest of their lives, Wisecup said.

“No one can ever take those tools away.” “This is the stepping stone from one point of life to another,” said Louters, who also serves as superintendent of the New Rockford-Sheyenne School District.

“I’ve spent a fair share of time in education,” she said. “It is life-changing and offers opportunities for success. I hope you’ll go on to do great things for UND, North Dakota and the world beyond. When you throw your hats into the air to mark the end of the ceremony, it will be the first of many more milestones to come.”

The ceremony ended with what has become a new tradition: the graduation dance, borrowed from UND hockey tradition when UND scores a goal.

As undergraduates moved their tassels after singing “Alma Mater,” Tack presented the new graduates to the audience with, “Ladies and gentlemen, Your UNIVERSITY OF NORTH DAKOTA GRAD – U – ATES!!” and they began dancing to “Chelsea Dagger” by the Fratellis. As the song launched, stremers flew, and graduates danced with joy.