Mary Wakefield, visiting scholar at UND, is named ‘Living Legend’ by the American Academy of Nursing

Posted at 13:12h in Campus Happenings by ddodds

Devils Lake, N.D., native served as the Acting Deputy Secretary of the U.S. Department of Health and Human Services under President Obama 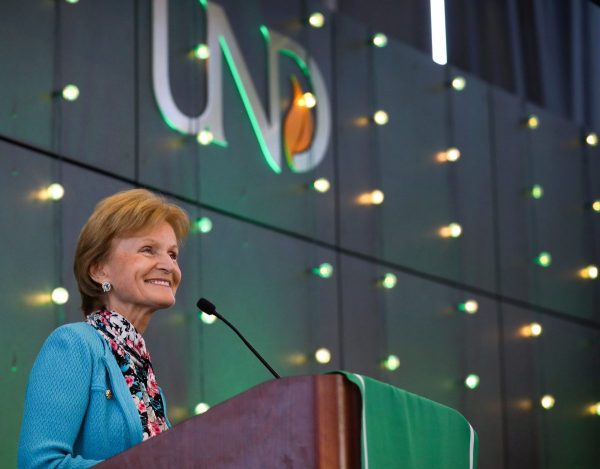 Mary Wakefield, Visiting Scholar of Healthcare Policy at the UND College of Nursing & Professional Disciplines, has been named one of five “Living Legends” by the American Academy of Nursing. The award is the Academy’s highest honor. She will receive the award in October for her commitment to transforming health care.

Wakefield, a Devils Lake, N.D., native, served as the Acting Deputy Secretary of the U.S. Department of Health and Human Services (HHS) under President Barack Obama, from March 2015 through January 2017, and as Administrator of the Health Resources and Services Administration (HRSA) from March 2009 through April 2015. She previously served as associate dean for rural health at the School of Medicine and Health Sciences at UND, where she also directed the Rural Assistance Center, now the Rural Health Information Hub. She taught nursing at UND from 1977 to 1987.

Her career has produced tremendous impact on health policy through her role in several high-profile positions within the federal government, said the Academy. During her tenure as Administrator of HRSA and as Acting Deputy Secretary of HHS, Wakefield led key health policy initiatives with a particular focus on health programs for rural populations. Wakefield is also a member of the Institute of Medicine and a fellow in the American Academy of Nursing.

She has served on a large number of public and not for profit boards and committees focused on bringing expertise in nursing, access to care, and health care quality and finance. She also serves as a Visiting Distinguished Professor at Georgetown University and the University of Texas at Austin, as well as serving as co-chair of the National Academy of Medicine’s Consensus Study on the Future of Nursing 2020-2030.

“We join the Academy in celebrating Dr. Wakefield’s contributions to the profession of nursing, the health policy of the nation and the education of scores of students,” said Diana Kostrzewski, interim dean of the UND College of Nursing & Professional Disciplines.