I did not initially plan for a career in institutional research. My original goal was to become a professor who conducts social-political psychology research. In 2008, I began my doctoral program at the University of Chicago. By 2013, I had earned my M.A. as well as a Ph.D. in social psychology with minors in political science and methods/statistics.

That year, I also began a two-year post-doctoral fellowship at the University of Nebraska Public Policy Center. There I continued my social-political psychology research. Altogether, those seven years of doctoral and post-doctoral training were dedicated to studying the social psychology literature, select literature from political science and other social sciences, statistics, and research methods.

Ultimately, in 2015, I decided the tenure-track faculty life wasn’t for me. While on the job market, I came across jobs in institutional research. I have been a researcher serving educational institutions and agencies of the State of North Dakota ever since. My training in research methods, statistics, and the psychology of survey responses has proven to be excellent preparation for my current work. 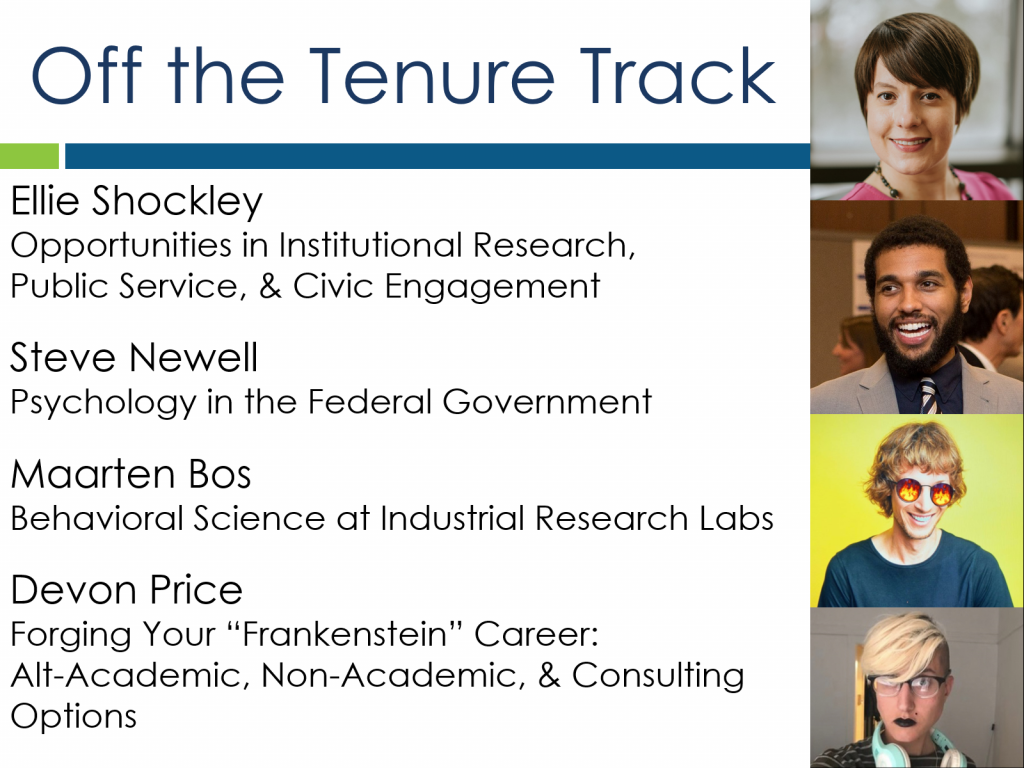 My trajectory has caught the interest of some research psychologists who are looking for a career change or who are advising graduate students on their career decisions. As a result, Dr. Kimberly Rios invited me to present a symposium on non-tenure track careers at the Annual Meeting of the Midwestern Psychological Association (MPA) in April 2019, held in Chicago. I recruited three other psychologists – Drs. Steve Newell, Maarten Bos, and Devon Price – to join me in presenting the symposium “Off the Tenure Track: Careers and Pursuits in Public Service, Civic Engagement, Non-Academic Writing, and Applied Research.”

The four of us described our current careers to an audience of grad students and professors who advise them. We described our experiences with behavioral research in industry, policy work, non-academic writing, adjunct teaching, consulting, and (of course) institutional research. The students and faculty who attended appreciated learning about our career paths, and so the symposium was a success.

While at the conference, I also attended several talks focused on cutting-edge statistical methods and issues facing psychological scientists. It’s important that I monitor new developments in the field in order to continually provide my stakeholders the best analyses. Presenters discussed statistical issues and techniques such as factor analysis, probability, randomization, simulations, survey respondent samples, experimental methods, psychometrics, and more.

Two presentations were particularly interesting. Dr. Simine Vazire delivered the American Psychological Association Distinguished Lecture. Her lecture, “The Credibility Revolution in Psychological Science,” addressed how we can make psychology (or any social science) more self-correcting and more reliant on sound practices. Beyond her psychological research, she is also well-known for her support for the “open science” movement. This movement seeks to normalize greater accessibility of publications, data sets, and statistical software. Historically, data sets have often not been publicly accessible. Similarly, publications have had restricted access behind the paywalls of scientific journals. The movement seeks to reduce such barriers to scientific access.

The other talk I found particularly interesting was Dr. Leandre Fabrigar’s MPA Presidential Address, “A Validity-Based Approach to Understanding the Replication Crisis in Psychology.” In it, Dr. Fabrigar discussed what it means when psychological scientists fail to replicate each other’s findings.

Science is a cumulative human endeavor. Replicating and extending the work of other scientists is critical. However, failures to replicate other scientists’ findings may occur for diverse reasons. Dr. Fabrigar rejects simplified explanations for such occurrences, such as the idea that the original research must be of poor quality if its findings are not replicated in a newer study. Failed replications may happen because of differences in methods, measures, and/or samples of human subjects. Understanding this helps reveal that we’re not necessarily in a scientific crisis. We do, however, have plenty to learn about how our research methods choices impact our scientific theorizing.

Attending and presenting at the MPA meeting was excellent. The experience reaffirmed that while institutional research is a great fit for me, advances in psychology continue to benefit my performance as a researcher.