Posted at 12:32h in Campus Happenings by ddodds 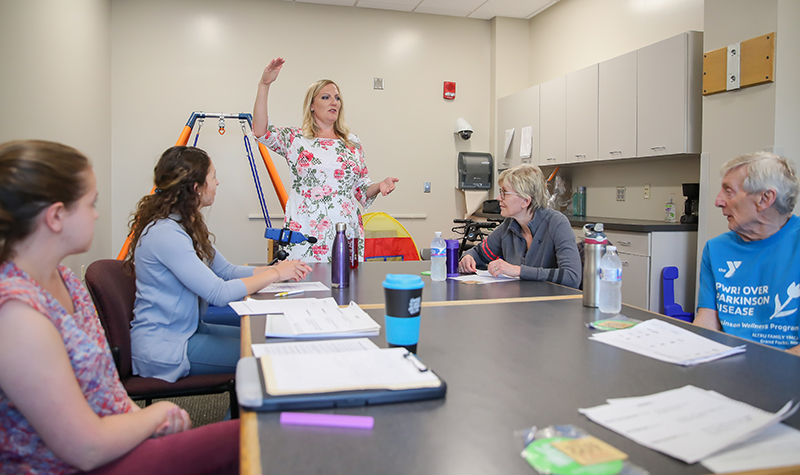 Jessica Foley, co-director of the Northern Prairie Community Clinic at the University of North Dakota, leads patients with Parkinson’s disease and UND graduate students through vocalization exercises. The session is part of the Parkinson Voice Project program, which the clinic offers to individuals with the degenerative disorder. Photo by Shawna Schill/UND Today.

After an hour of breath work, articulation drills and other vocal exercises, Bob – a patient with Parkinson’s disease – voiced his wish for this article: “Write it with intent.”

Nowadays, intent seems to be at the front of his mind, spurred by Bob’s participation in the novel speech program for patients with Parkinson’s disease at the University of North Dakota’s Northern Prairie Community Clinic. The clinic offers mental health and speech-language pathology services to the public while serving as a training site for graduate students in those fields.

An offshoot of the Richardson, Texas-based Parkinson Voice Project, the clinic’s speech program follows the therapeutic focus on “speaking with intent” as it helps individuals with the degenerative disorder retain and maintain their voices.  Parkinson’s saps the neurotransmitter dopamine, and that, in turn, hampers automatic actions such as walking, speaking and swallowing. As a result, patients often need to consciously perform what most take for granted.

“That’s why we’re always telling them: speak with intent, live with intent,” said Jessica Foley, co-director of the clinic and certified provider of the Parkinson Voice Project therapy sessions.

There are therapy and support groups for individuals with Parkinson’s in greater Grand Forks. The YMCA offers physical exercises, for example. A local church provides the opportunity to sing, which strengthens the voice. The hospital offers speech therapy.

But there is also the need for more, as one YMCA volunteer had relayed to Foley.

That’s why when Foley heard about the Parkinson Voice Project last year, she did not hesitate. She went through an extensive online training, gathered graduate students and, in fall 2018, started a pilot SPEAK OUT!® program with a couple of patients.

The initial step in the Parkinson Voice Project’s two-pronged approach , SPEAK OUT! consists of one-on-one therapy sessions – usually 12 of them – that can all fit into a month of work with a language pathologist.

“It’s really about regaining that strength so patients can have the endurance to maybe get through a whole conversation or read a whole paragraph,” Foley said.

This April, she secured a grant from the Parkinson Voice Project to offer SPEAK OUT! graduates the second portion of the program – the LOUD Crowd® – for free. The funds also cover the professional training for all involved graduate students – 21 in the past academic year – and two more UND professors.

The LOUD Crowd crew of three patients, two students and Foley first began meeting in February, completing one round and starting another in early June. September will mark the start of the third LOUD Crowd session at the Clinic.

In a LOUD Crowd meeting in early July, Bob sat across the table from Foley, who had just returned from an instructional conference with the Parkinson Voice Project in Dallas.

Two other patients sat to Bob’s right, and graduate students Izabela Matusz and Bailey Reiner were to his left in a small room in the clinic in Columbia Hall.

Led by Foley, everyone engaged in warm-up exercises, vocalizing O’s and A’s and E’s. Then they counted from one to 12 and backwards. People took turns reading short passages about the history of Independence Day, which was approaching. At the end, they shared their plans for the holiday.

Throughout the hour, as some participants stumbled or whispered or blurted out words, Foley and the students nudged them to repeat, to speak louder, clearer – with intent. While the exercises target patients’ vocal capabilities, they can also improve their swallowing, fending off the chance of aspiration pneumonia or the inhalation of food and saliva that can result in choking.

“So that’s another thing that’s really important for people with Parkinson’s – to have safe swallowing,” said Foley.

Focus on patients and students

Focused on patients, SPEAK OUT! and LOUD Crowd also help the clinic fulfill one of its primary goals of immersing graduate students in the treatment of various disorders.

“Not only do they get a little experience, they can actually become providers when they graduate,” said Foley. “So, that’s another great thing about it.”

Yet another remarkable aspect of the growing program at the clinic is its potential to significantly delay the socially excruciating possibility of losing one’s ability to speak.

“Think about how important your voice is,” said Foley. “People with Parkinson’s can lose their voice. And, then, a lot of times, it can lead to some isolation, or withdrawing from activities in life. We want patients with Parkinson’s to know that you don’t have to lose your voice. There’s something that you can do about it.”

If you have or know someone with Parkinson’s disease, reach out to Jessica Foley about SPEAK OUT! and LOUD Crowd at jessica.l.foley@UND.edu or 701.777.3312.