Posted at 12:35h in Campus Happenings by ddodds 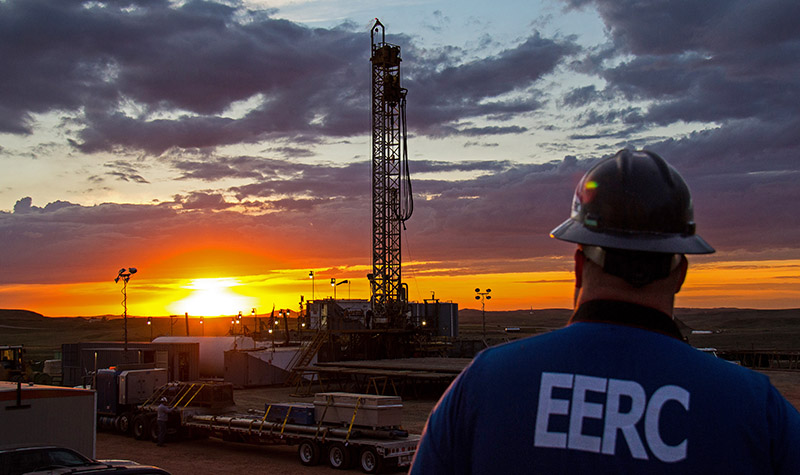 At a time when much of the focus in the U.S. is on extracting oil from shale and other unconventional sources, the Energy & Environmental Research Center (EERC) at the University of North Dakota is exploring new ways of pulling oil from conventional resources. Conventional geologic formations contain oil-bearing rock that’s more porous and more permeable than unconventional resources. But what researchers learn from studying them can also be applied to unconventional formations throughout the Williston Basin, which extends into Canada and covers parts of North Dakota, Montana and South Dakota, said Ed Steadman, EERC vice president for research.

The old way of drilling vertical wells into conventional resources has given way to the horizontal drilling and hydraulic fracturing techniques used in the Bakken and Three Forks unconventional shale formations, where more than 95 percent of North Dakota’s oil extraction occurs today. The EERC’s projects return to the much deeper Red River formation — composed of rock similar to limestone — originally targeted by the oil and gas industry.

“It’s a huge enhanced oil recovery target that’s estimated to be 400 million barrels of potentially recoverable oil,” Steadman noted. “Even though it’s conventional — not the Bakken or Three Forks — it’s a large target that would have dramatic economic impact. If we could increase our conventional production, that just benefits everyone.”

Each 1 percent increase in extraction translates into $1 billion of oil production, he said.

“That’s what enhanced oil recovery is all about: squeezing that last bit of oil out,” Steadman explained.

“It’s a great thing on one day to get two $8 million contracts,” Steadman said. “I don’t know that we’ve ever done that before.”

Each project also includes $2 million in non-federal, industry cost-shared funding, bringing the total for both to $20 million. The duration of each project is five years.

For the past decade, unconventional oil extraction using horizontal drilling and hydraulic fracturing in the Bakken shale play has elevated North Dakota to the No. 2 oil producing state in the U.S., with nearly 1.3 million barrels per day extracted in 2018 and new records being set in 2019.

Meanwhile, production from conventional rock formations has fallen to around 3 or 4 percent of the state’s total. These formations — thousands of feet below the surface — are often in sandstone, limestone or dolomite that have greater porosity and permeability than shale and, therefore, don’t require hydraulic fracturing.

“North Dakota’s been producing oil since the 1950s, and most of that has been from conventional reservoirs,” said Steve Smith, principle geologist with the EERC’s integrated analytical solutions team. “It’s time to shift some of the focus back to those conventional reservoirs and start to really attack that resource.”

Getting more oil out

Primary recovery in conventional formations is done mostly with wells drilled either vertically or horizontally, usually without hydraulic fracturing. It can recover up to 20 percent of the oil in the rock. This is followed by secondary recovery, in which water is used to flood the formation and extract up to another 15 to 18 percent of the oil.

Because a significant percentage of oil remains trapped in the rock, tertiary recovery is used to extract another 15 to 17 percent of the oil. Carbon dioxide is transported to the well site by pipeline and pumped down into the rock through an injection well. It mixes with oil and expands as it moves through the formation. A production well then collects the oil forced out of the rock by the CO2.

Smith noted that the amount of oil extracted in each of these stages varies with oilfield conditions.

“If you’re looking at 10 to 20 percent recovery on primary, 10 to 12 percent on secondary and maybe another 10 percent on tertiary, there’s still a vast quantity of oil to be had in each one of these reservoirs,” he said.

The EERC will be involved in two different research projects. The first will be at the Denbury Resources Bell Creek oilfield in southeast Montana, which has undergone CO2 injections since 2013. Beginning in 2021, the EERC project will blend the CO2 with a rich hydrocarbon gas — probably ethane or propane — to further increase the volume of oil extracted, according to Lu Jin, senior reservoir engineer at the center.

“We’ve found that rich gas can dramatically improve the selectivity in removing more of the heavy hydrocarbons trapped in the porous rock,” Jin explained. “As a reservoir engineer, when I look at the production history of North Dakota, I really get excited about the potential.”

For years, the EERC has tested this enhanced oil recovery concept in the lab and with modelling and simulations, studying the interaction of the rich gas components with CO2 and oil.

“What we’re looking to do is extend those laboratory analyses and simulations to the field to test whether our approach is valid, to prove that it will provide the enhanced oil recovery effect,” Steadman said.

This project will use new technologies such as data analytics and machine learning to improve the efficiency and economics of innovative well designs and operations, boosting oil extraction. “The intent is to provide a mechanism that can greatly reduce the amount of effort required by the operator,” Smith said. “Pressure and temperature gauges embedded in the sides of the well can help us understand what’s happening in the well bore. We’ll be able to see that data in real time.

“The big new piece of this project,” he added, “is being able to integrate that data, as well as some intermittent data, and integrate that in a machine-learning approach to automate operations. That way, it increases autonomy and reduces the amount of human input required to manage the field.”

Nick Bosshart, a principal geoscientist who oversees the reservoir engineering and geoscience teams for the EERC’s subsurface research, pointed out that another important advantage of enhanced oil recovery technology is that is makes use of existing infrastructure.

“The infrastructure is already there from the primary and secondary production,” he said. “It’s a relatively low-cost investment to continue on with tertiary production, as long as working fluid like CO2 or rich gas is available. That’s a very big benefit.”

The results of the EERC’s research have potential application well beyond the Williston Basin region, which is one of DOE’s main objectives in funding enhanced oil recovery research.

“The technology is applicable to other parts of the world,” Jin said. “We’re not just focused on a particular field or reservoir, but also on technologies and mechanisms. Once we get a breakthrough, the technology can be applied anywhere that has similar reservoir properties and geological properties.”