Posted at 14:59h in Campus Happenings by ddodds 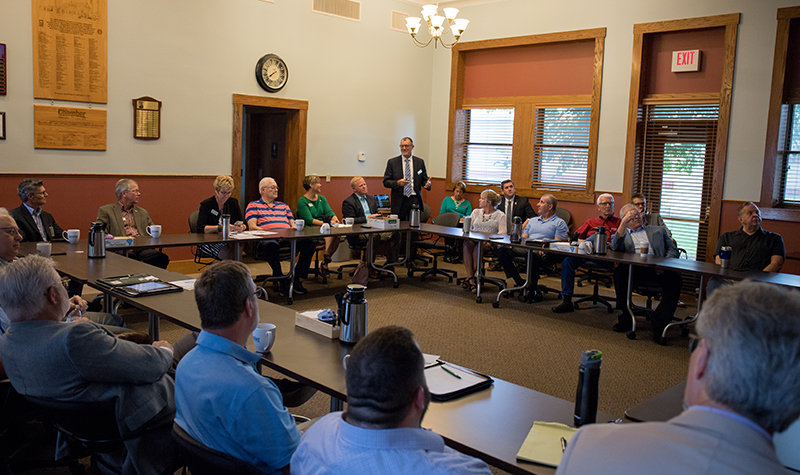 Together, we build the future.

That message resonated when UND leaders met with a key committee of The Chamber of Grand Forks and East Grand Forks early Wednesday morning.

“Our relationship with UND has never been better,” said Todd Feland, city administrator for Grand Forks and committee co-chair. “It’s based on real opportunities.”

Along with construction updates, the Business, Government, Education Alliance Committee learned about future projects, including a proposed new College of Business and Public Administration.

As committee members saw slides of the building and perused an information booklet, DeAnna Carlson Zink, CEO of the UND Alumni Association & Foundation, spoke about the project’s importance.

“The College of Business & Public Administration is losing the recruiting battle,” said Carlson Zink. “We have an urgent need to update the building. Students and their families are coming through Gamble Hall, walking out the door and heading south down I-29, where they will see new business school buildings at Concordia, NDSU, South Dakota State, and Omaha, all built in the last six to 10 years. Some of these students, even if their parents are alumni, don’t choose UND for business.

“We have outstanding programs and faculty. We need a great facility to compete.”

The future of business

“This is about creating opportunities for students tomorrow – today,” she said.

A new College of Business & Public Administration building has been made possible by a “magnificent” $20 million anonymous gift, said Jed Shivers, UND Vice President for Finance and Operation. The North Dakota Legislature approved $20 million in matching funds, and an additional $30 million is being sought from donors.

“We’ve been talking about and working on the Business & Public Administration building for 15 years,” Carlson Zink said. “It’s important to the University and the state. We have sent so many leaders into the state and world from this college, and we want to show the Legislature that they made a good commitment.”

UND hopes to have enough money raised for construction to begin in the fall. “I want to thank legislators and the business community for helping make this happen,” Carlson Zink said.

Construction updates took up much of the rest of the meeting.

UND has more than enough space, but that space can be better used, said Mike Pieper, associate vice president for facilities.

The ultimate goal, Pieper said, is for the UND campus to be compact and connected, and for the core campus to contain nearly all academic space except for the medical and aerospace complexes. Adding new housing options and mixed-use space will make the campus more vibrant, he added.

“We are investing $350 million in the academic core of campus,” Pieper said. “Much of that is restoration. I’ve never seen so many original windows.”

UND is currently building a new energy-efficient steam plant, and the old plant will be removed, opening up the campus. The project is part of a public/private partnership with Johnson Controls, and UND hopes to initiate similar team efforts.

In addition, “I’m always asked about Ray Richards Golf Course,” Pieper said as he put up a slide of the greens. “All the greens have been rebuilt, and we expect a soft opening in the fall.”

UND is undergoing a historic level of campus renewal, said Brian Larson, director of construction management at the university.

The original president’s home, previously known as the Stone House, will become the Gershman Engagement Center, thanks to the generosity of Hal and Kathy Gershman. The renovated building will be a center for graduate and international student collaboration.

Larson said that the Memorial Union is nearly demolished, and he showed slides of the new student union, which will be built on the site.

“It will be the living room of campus,” Larson said.

“We are working to make the University and community proud,” said Shivers. “Consolidating space is not easy to do. We know there are strong feelings about it, and we are working with the community and Historical Preservation Society.”

Shivers said the Memorial Union project has been driven by students, and described how the University worked to offset the costs to students by reducing the amount of student fees.

“President Wynne is very focused on student debt,” Shivers said. “At his direction, the University will contribute another $250,000 per year related to the future Memorial Union, and that will help to reduce overall student fees.”

After the presentation, UND administrators took questions from committee members.

UND’s tuition is very reasonable compared to other colleges, said a legislator. Shivers replied that UND looks very carefully at tuition, which is below Minnesota averages and 25 percent lower than the University of Minnesota-Crookston.

“We are very competitive, and we will continue that,” said Shivers. “This reflects what we want to do in the state. We want to stay affordable and provide high value.”

A committee member asked how many students take online courses at UND.

“Online courses are tailored to meet the needs of students,” said Shivers. “They are demanding it. Nearly half of our students have taken an online course.”

In answer to a question on how online learning affects campus space, Pieper said it does have an influence, but that influence is counterbalanced by active learning classrooms and other amenities on campus, including a new Student Union.

“It’s all about student connections,” said Cara Halgren, vice president for student affairs. “If students are connected, they’re happier. Anxiety is an issue, especially with the rise in technology. Students feel less connected, and we’re looking at how to create space for human connection. That’s why we need the new Memorial Union and the business college.

The new buildings, as well as other campus construction, will help fulfill that goal, she added.

Said Vice President for Marketing & Communications Meloney Linder to the committee, “Thank you for all you do for UND. This work doesn’t happen alone.”