Posted at 14:53h in Campus Happenings by ddodds 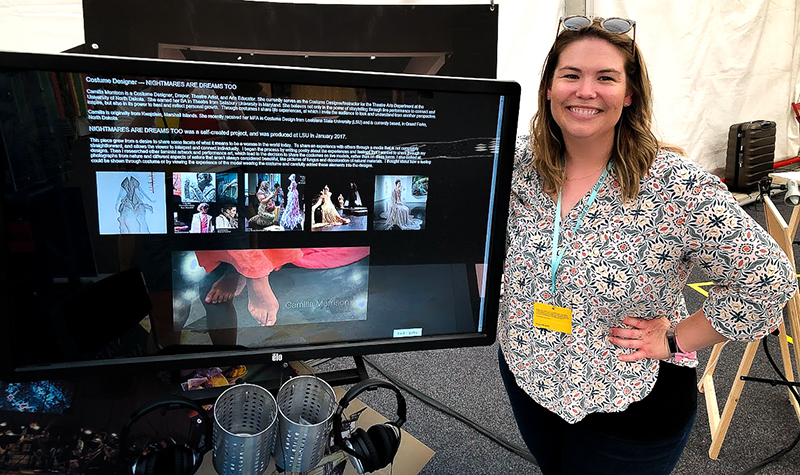 Camilla Morrison, University of North Dakota costume designer and instructor, stands next to the display of her work, Nightmares are Dreams, Too, at the Prague Quadrennial festival this June. Image courtesy of Camilla Morrison.

When Camilla Morrison opened the email, she read it several times before letting the thrill surge through her.

For the email bore great news. Morrison was one of about 30 American emerging artists who’d been selected to showcase their work at the Prague Quadrennial of Performance Design and Space.

Established in the late 1960s as a celebration of scene design and performance art, the Prague Quadrennial takes place once every four years in the Czech capital city. It draws scenographers, costume designers, choreographers and other theater creatives from around the globe.

“It was an honor to be a part of the United States Emerging Artists exhibit,” said Morrison, who is a costume designer and instructor at the University of North Dakota. “And to see the quality of work and the variety of work that was there from all the countries, that was really exciting. And I’m very proud to be a part of that.”

With a grant from the United States Institute for Theatre Technology (USITT), which handles applications for the American section at the international festival, Morrison traveled to Prague in June.

Between nightmares and dreams

There, in an exhibition hall full of displays and live acts, glowed a screen dedicated to Morrison’s work, Nightmares are Dreams, Too.

Many designers do not show tangible pieces at the Prague Quadrennial, but instead feature photos and videos of their projects.

It was a fitting arrangement for Morrison, who, today, has only one of the six costumes that make up Nightmares are Dreams, Too. The rest are with the people who inspired them and wore them for the 2016 debut of the collection, which formed Morrison’s master’s thesis at Louisiana State University.

“Well, I couldn’t really take them with me when I moved to Grand Forks,” Morrison said with a laugh.

What she did take, however, is an elaborate, dreamy, pale pink gown titled “To be a woman” that now hangs in her office in Merrifield Hall.

“The piece meant to show that women are expected to be very strong, but also very delicate at the same time,” Morrison said.

To convey that feminine duality, she shaped a silhouette out of flowing silk and enhanced it with rigid wire ruffles that jut out to frame the wearer’s face.

The other five pieces complete Morrison’s interpretation of modern-day womanhood, from the need to care for others to the pressure to conform to societal beauty standards.

Together, the costumes stand out for their unconventional cuts and bold messages. But their originality also hearkens back to the techniques Morrison used to create them.  After a year of developing ideas, she slashed fabrics, molded hat wire and used Japanese tie dying for three months in 2016.

“I like to combine a lot of things that aren’t necessarily considered very beautiful to look at on stage,” said Morrison.

Some three years later, that creative flair shows itself in Morrison’s work with UND’s Burtness Theatre, where she heads the costume department. Her “cel-shading” renditions for Seussical last fall, for instance, offered a new frontier for the costume shop at the University, where students learn design. Its uniqueness even made it to a USITT conference in March, where Morrison presented the approach.

Although her busy professional schedule leaves little time for personal undertakings of the scope of Nightmares are Dreams, Too, Morrison said she revels in the opportunities for expression, cooperation and experimentation at UND and other side engagements.

Over the summer and after returning from Prague, she took her artistry to the Black Hills Playhouse in Custer State Park in South Dakota. There she put together the stage attires for Steel Magnolias, which premiered last week.

“I really like to help tell stories – to help tell the stories of other people in an expressive way on stage,” Morrison said. “I love working with other people, which is why I enjoy being a theater artist.

“And as a costume designer, I get to collaborate with many people, other designers, directors, actors, in a very deep way, so that we can all create something for the community together.”