Posted at 20:43h in Campus Happenings, Uncategorized by ddodds 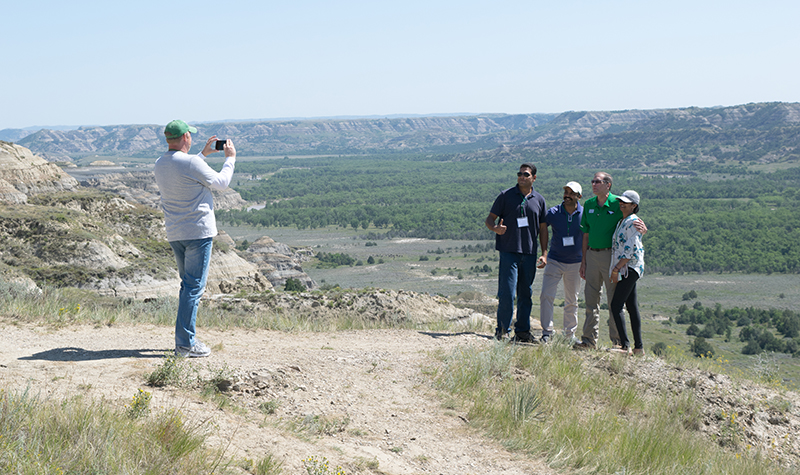 One summer day back in 2005, when Joshua Wynne was a newcomer to the School of Medicine & Health Sciences (SMHS) at the University of North Dakota, he boarded a bus packed with fellow newly hired UND faculty and administrators to traverse the northern half of the state.

The goal of the tour was to immerse the group in North Dakota’s hospitality, cultures and natural resources.

“As a person who worked in really big cities, it was pretty eye opening to see what North Dakota was really like,” said Wynne.

Earlier this week on a balmy August morning, Wynne clambered up a UND bus once again, headed for the northern part of the Peace Garden state. This time, he was the University’s interim president and was playing host to about 30 people who found themselves in the same shoes he did 14 years ago.

Wynne helped usher the group into what he called “life in the vast lane,” a phrase he first spotted in a caption of a picture of the prairie that belonged to a former SMHS dean.

The UND Bus Tour has traveled that metaphorical vast lane for 29 years, supported throughout by the University’s Alumni Association & Foundation. In addition to showcasing various facets of North Dakota, the tour “gives the University an opportunity to do outreach in the state,” said bus tour organizer Fred Wittmann, UND’s director of ceremonies and events.

Alums along the way

The first stop in 2019 was Marvin Windows in Grafton, some 40 miles northwest of Grand Forks. There, the tour participants wandered through the factory floor, lined with windows at various stages of production. Afterward, they learned about the manufacturer’s strides – and struggles – as it works to attract well-educated employees in small-town USA. Currently, about 25 percent of Marvin’s workforce consists of UND graduates.

A UND alum welcomed the group at the next stop, Leading Edge Equipment in Devils Lake. Jim Vasichek, owner of the John Deere dealership and a College of Business & Public Administration graduate, let the tour attendees climb onto green tractors and combines that sparkled in the mid-day sun. Meanwhile, his staff chatted about agriculture in the region, where generations of farmers have relied on Vasichek’s family business for machinery.

While Vasichek may be a novice to hosting UND entourages, Jerry Effertz is a veteran. A third-generation farmer at Black Butte Acres near Velva, Effertz and his wife, Norma, first opened their home – and land – to the alma mater of their two daughters in 1994, only a couple of years after the start of the annual bus tours.

In fact, it was the Effertz’s eldest daughter, Maria Effertz Hanson, who initiated what is now a 25-year streak of hospitality. As a student body president in her senior year, she not only invited the UND bus tour to her family’s farm (without asking her parents first), but in the process conceived what would become a must-stop on the northern tour’s schedule.

“No matter what happens in North Dakota, and no matter where you are, it’s vital to understand agriculture and the importance it has to North Dakota,” said Hanson.

The first evening on the tour, Jerry manned the barbeque in his lush backyard, helping fix a delectable supper for the UND group after showing everyone the farm – and showing off the region’s past and present – from the vantage of Black Butte. One of the highest points in region, Black Butte rises up near a historic Native Indian trading trail.

Discoveries on the road

The second day of the welcome-to-North-Dakota journey began at the Mandan Hidatsa Arikara (Three Affiliated Tribes) Museum in New Town on the shores of Lake Sakakawea, part of the Fort Berthold reservation. The tour goers also stepped inside earthen lodges on the outskirts of town, where the Native tribes’ histories and cultures steep the prairie knolls.

“The tribal museum and the earthen lodge were one highlight on a great trip,” said Diana D’Amico Pawlewicz, education historian at UND. “Seeing these amazing artifacts and hearing the stories that they were sharing with us was such a wonderful, powerful experience because, I think, it really brings to the center a history that is often not put in the center but should be.” After a drive through Watford City with Daniel Stenberg of McKenzie County Economic Development, the UND bus halted for lunch at the McKenzie County Medical Center. Last year, the rural health care provider relocated to a new facility that embodies the remarkable growth of western North Dakota. Here, joined by local leaders and legislators, President Wynne, described the pivotal role of the University in nurturing the state’s medical professionals.

“I was impressed that the health system has been able to recruit and retain more physicians, particularly in critically important areas like general surgery, and very soon in ob-gyn,” said Wynne, who also serves as vice president for health affairs at UND in addition to his SMHS deanship.

“At least a part of that is thanks to the efforts of the School of Medicine & Health Sciences and its faculty, staff and students for helping to provide the milieu and the environment where rural health care delivery is considered a priority.”

A custom for the UND bus tour is to visit another higher-education institution in the state. This year, a dinner at Minot State University, hosted by Minot State President Steve Shirley, offered tour goers the chance to mingle with counterparts there as well as with prominent locals.

Another tour standard is a quick trek through Theodore Roosevelt National Park, where the participants spotted bison grazing amid craggy buttes and steep ravines. Yet another custom is a meet-and-greet with incoming high-achieving UND freshmen and their parents. A casual occasion to introduce fledgling Fighting Hawks to some of their future professors, the gathering began the third and last day of the trip.

An energy-focused jaunt to Tioga whisked the tour participants deep into oil country. There awaited a Bakken 101 lesson by Neset Consulting Services President Kathleen Neset, who also serves on the State Board of Higher Education. Stops in Rugby and Lakota, where the community treated tour attendees to a hearty dinner, marked the 300-mile drive back to UND’s campus as the vast lane of North Dakota carried the group home.

“North Dakota is different,” said Wynne. “The landscape is different for many of us; the culture is different. The opportunities and the challenges are to some degree unique. And I think it is almost essential for someone who is new to the community of North Dakota to get to know it.

“And I must say, I can’t think of a better way of doing it than on the bus tour.”