Posted at 20:38h in Campus Happenings by ddodds 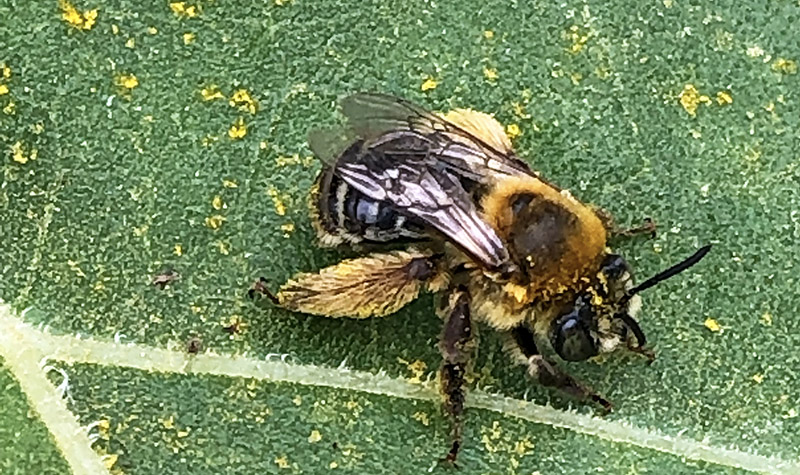 Last week was the first time Paul Snyder, director of the UND Aerospace Unmanned Aircraft Systems (UAS) Program, got a firsthand look at technology from Australia that could help North Dakota sunflower farmers increase production through a process known as precision pollination.

Kate and David Lyall, co-founders of an agricultural technology company called Bee Innovative, came all the way from Australia to run tests using drones equipped with bee sensors on two sunflower fields near Bismarck, N.D. Snyder said he was impressed with how small unmanned aircraft equipped with the company’s BeeDar could track the movements of the bees pollinating the sunflowers.

“It’s amazing to see the amount of traffic as bees are coming into and moving out of the field all day,” said Snyder, the project’s principle investigator. “It’s like a fine-tuned machine.”

BeeDar identifies, tracks and reports honeybee pollination activity in near real time, enabling farmers to make better use of beehives to improve pollination, which increases yields and crop value.

For their part, the Lyalls were impressed with the quality of the sunflower crop, North Dakota’s farmers and farming operations, as well as the state’s beekeeping practices.

“It’s a lot greener over here than it is at home,” said Kate Lyall, Bee Innovative’s chief technology officer. “Australia is having the worst drought in living memory at the moment. They didn’t even plant sunflowers last summer.

“It’s good to see the beekeeping practices are a little different from home,” she added. “We’ve been talking to beekeepers to understand how they manage their hives.”

David Lyall, the company’s CEO, said, “Here in the U.S., the farmers seem to be really on top of their game. They have very good rotational programs planned out quite well in advance. They’ve got really good management systems where they’re planting the crops at the right time and putting treatments through — whether it’s fertilizer or fungicides — to really keep their crops growing at peak performance.”

The Lyalls believe the success they’ve experienced in Australia increasing the production of blueberries and other crops will also translate into improving sunflower yields in the U.S. The goal of the North Dakota project is to compare one sunflower field that’s received the benefits of Bee Innovative’s technology with one that has not.

UND scientists and researchers are collaborating with Bee Innovative with the support of the National Sunflower Association, headquartered in Mandan, N.D. Last week, a UND drone equipped with a multispectral camera flew over both fields to assess crop health.

Haochi Zheng, assistant professor with the aerospace school’s Earth Systems Science & Policy Department, has been working with local beekeepers to monitor hive health. She will compare the results from the two sunflower fields and report on the economic impact.

In addition, Bee Innovative has been working with the UND Center for Innovation to establish a business presence in North Dakota. The Center helped in getting a $59,113 North Dakota Agricultural Products Utilization Commission (APUC) award through the John D. Odegard School of Aerospace Sciences. The aerospace school provided another $10,000 in funding to support the project.

“He’s been a fantastic person to work with and has a lot of expertise, particularly in UAS,” he said. “That’s been a big advantage for us. It’s been helpful that we’re all operating the same UAS platform when we’re talking to each other about performance capabilities. We’re all on the same page. That opens it up for us to do more things in the future.”

As Agweek magazine reported, the couple “searched the world for knowledge on unmanned aerial systems and landed on UND as the most knowledgeable place.”

Canola is a crop with similarities to sunflowers, David explained, and an opportunity Bee Innovative is interested in exploring with UND. He also sees the possibility of enlarging the research project on sunflowers next year.

“There’s some other areas to identify and potential collaboration between UND and Bee Innovative,” David said.

The Lyalls returned to Australia early this week but plan to come back to the Bismarck area in October to collect more data during the sunflower harvest. They will present project results during the annual National Sunflower Association conference next January.