Posted at 14:58h in Campus Happenings by ddodds 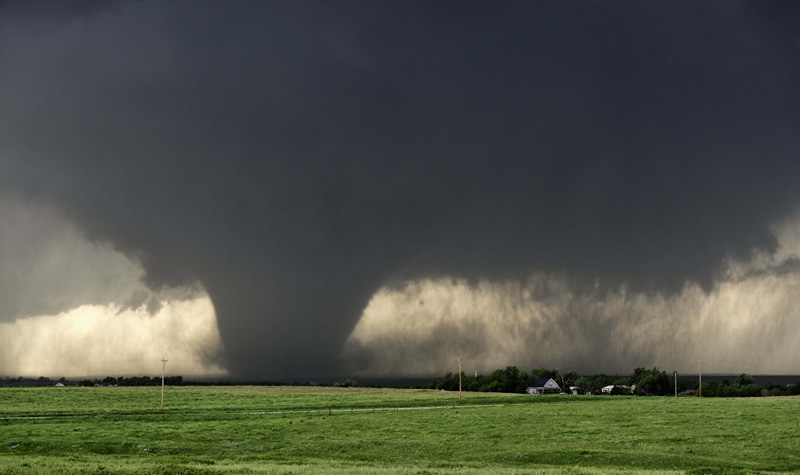 A state-of-the-art computer model simulating the supercell thunderstorms that spawn the largest and most destructive tornadoes have atmospheric scientists questioning the widely accepted concept of how tornadoes form. Photo courtesy of UND Atmospheric Sciences.

What we think we know about how and why tornadoes form could be wrong.

Catherine Finley, assistant professor of atmospheric sciences at UND, is collaborating on a National Science Foundation (NSF) project with Leigh Orf, associate scientist with the Space Science and Engineering Center at the University of Wisconsin in Madison, and Bruce Lee, managing atmospheric scientist of High Impact Weather Research & Consulting LLC. They’re using an atmospheric model run on a supercomputer to simulate supercell thunderstorms that typically spawn the strongest, largest, longest-lasting and most deadly tornadoes.

Given that roughly three-quarters of the tornado warnings issued by the National Weather Service are false alarms, the ability to recognize and detect signs in the atmosphere leading to the formation of a tornado could result in more reliable and longer advance warnings — warnings that save lives. “This work is really groundbreaking because when you’re out in the field — and I’ve actually done some observational research in tornadoes and severe storms — almost always prior to tornado genesis, you see the development of what we call the rear-flank downdraft,” Finley said.

Those who watch TV shows or YouTube videos about tornadoes and storm chasing have likely heard references to rear-flank downdraft or RFD, a phenomenon that produces strong winds on the back side of a tornado. For that reason, it’s an area storm chasers usually try to avoid.

“People thought that RFD was a crucial part of the tornado-genesis process, and it still may be,” Finley said. “We’ve understood for a long time that the main spin of the supercell comes from the environmental wind shear, but nobody fully understands where the spin comes from that feeds the tornado.”

Orf’s pioneering work in computer modeling offers some promise in solving the problem, although he and Finley both admit they’re a long way from a definitive answer.

“What this research is showing is that maybe we should be focusing more on the forward flank of the storm,” Finley explained. “It could actually change our whole paradigm of the tornado-genesis process.”

Before coming to UND in January, Finley studied tornado genesis at St. Louis University in Missouri. She intended to analyze the RFD on a computerized simulation based on an Oklahoma tornado when her graduate student asked, “What downdraft?” The simulation had produced a tornado with no RFD near the surface.

“We started questioning what was actually going on and ran several different scenarios,” Finley recalled.  “The nice thing about models is you can change things a little bit and see what effect it has.”

The question the research group is now trying to answer is: what causes the air to spin faster at low levels where tornadoes form?  Their theory is that a sudden drop in pressure is drawing in and concentrating the vorticity — the rotating wind — associated with the storm. This vorticity is then stretched by a strong low-level updraft that significantly speeds up rotation.

The group’s model show spinning vortices, sometimes invisible to the human eye, being drawn in to form what becomes the tornado funnel.

“The RFD may not be the cause of the tornado; it may be an effect,” Finley said. “We have an alternate theory for the specific type of storm we’re studying. We are arguing that it has more to do with the forward flank and the streamwise vorticity current (a spiraling inflow of air). It’s the pressure drop.”

Orf has spent a decade using his coding skills to modify a computer model to run on the Blue Waters Supercomputer at the National Center for Supercomputing Applications at the University of Illinois at Urbana-Champaign. The model was originally developed by George Bryan at the National Center for Atmospheric Research. Finley did the groundwork and initial model simulations of the April 27, 2011, tornado in Tuscaloosa, Ala., one of the storms from the exceptionally destructive super outbreak of that week. Finley’s work included finding a realistic and representative atmospheric sounding from the National Weather Service that would produce a tornado in the model.

In addition to the group’s internal validation work, Orf has been working for the past two years with Hank Schyma, aka Pecos Hank, a Houston-based storm chaser with more than 20 years of experience. Schyma’s high-quality videos of supercells and tornadoes enable Orf to directly compare his models with what Schyma has experienced in real life. They recently posted a YouTube video making side-by-side comparisons of their work.

“Honestly, it helps me understand whether the model is doing the right thing or not,” Orf explained. “If it looks like a dead-ringer for a real storm, then I know the model itself isn’t creating some bizarre, unreal thing. It’s what’s really going on inside a storm.”

Schyma remembered the first time he watched a video showing one of Orf’s computer simulations.

“I was astonished by how accurate and beautiful they were,” he said. “I thought they were Hollywood creations based on observations. I didn’t realize that a supercomputer grew them, not a human. I’m learning a lot from watching these simulations.”

Finley noted that what’s not seen is the number of times the models don’t produce the expected results from the data entered into them.

“We have failures all the time,” she admitted. But when a simulation parallels a real storm? “You start cheering and telling all your friends, ‘Look at this! Look at this!’ It’s really exciting.”

Although Schyma isn’t a scientist, he believes that Finley and Orf are on the right path to unlocking the secrets of supercells that form tornadoes.

“I’m ready to say this is an accurate proxy to Mother Nature, and we need more of these simulations,” Schyma said. “I think this is the most powerful tool that we have right now to help us understand these supercells.”

Finley grew up in Benson, Minn., where her father was one of the first spotters for the National Weather Service Sky Warn program. Always interested in weather and encouraged by her parents to pursue meteorology, she spotted her first tornado at the age of 12. She continues to chase storms, understanding that it’s important to see what happens in nature.

She also knows all too well the risks associated with storm chasing. On May 23, 2008, near Quinter, Kan., Finley and Lee were in a car equipped with instruments to take measurements as science directors of a tornado research program known as TWISTEX (Tactical Weather-Instrumented Sampling in/near Tornadoes Experiment). They thought they were in a safe location to observe a tornado, but within a minute, all that changed.

“That’s the only time I’ve been actually scared when we were out in the field,” she said. “We came very close to getting hit by the edge of the tornado.”

The tornado quickly grew to a mile wide and unexpectedly turned toward them. A 108-mile-per-hour wind gust blew the car off the road and into a ditch, and toppled nearby power lines. There was no time to escape. On her office computer, Finley showed a video taken from a distance by another storm chaser. The edge of the tornado narrowly misses the car. Amazingly, Finley and Lee escaped without injury.

As founding members of TWISTEX, Finley and Lee knew project leader Tim Samaras well. His storm-chasing exploits and research have been featured on National Geographic and the Discovery Channel TV shows. On May 31, 2013, Samaras, his son Paul and chaser Carl Young lost their lives while chasing a tornado near El Reno, Okla. The largest tornado ever recorded made an unexpected turn.

“People in the El Reno event described the same thing that we experienced,” Finley noted. “They thought they were at a safe distance and, all of a sudden, it seemed like the tornado was right next to them.”

Eight were killed by the El Reno tornado, all of them in vehicles. But Finley knows that to better understand tornadoes — however dangerous the storms can be — she needs to chase them and observe them, as well as model them.