Posted at 23:17h in Campus Happenings by crhoades 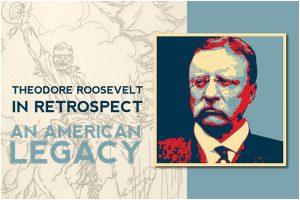 As this year marks the hundredth anniversary of Theodore Roosevelt’s death, the theme of this year’s symposium is “Theodore Roosevelt in Retrospect: An American Legacy,” which will feature a “Cartoon-Off” between cartoon expert Rick Marschall and our own humanities scholar, Clay Jenkinson, Thursday, Sept. 12, at 7 p.m. in Dorothy Stickney Auditorium. Each will present and make the case for their favorite Roosevelt cartoons, which highlight various aspects of his legacy.

A few other feature events include:

“Our symposia are really just extended conversations about important topics that are relevant today,” said Sharon Kilzer, project manager for the Theodore Roosevelt Center. “There is something for everyone, whether you are interested in Theodore Roosevelt or not, and we hope you will join in the discussion of historical questions that still rankle in our times.”

One hundred years after his remarkable life ended, Theodore Roosevelt continues to influence our life as a nation and as individuals. Join in this conversation about his legacy in leadership, conservation and more.

To register, or for more information, visit www.dickinsonstate.edu/tr. These events are open to the public, and most are free to attend. Registration for DSU faculty, staff and students is free.

The Theodore Roosevelt Center is dedicated to preserving the legacy of America’s 26th president. The Center has undertaken the monumental task of creating a presidential digital library that will serve as a repository for all Roosevelt-related documents, photographs and ephemera, providing instant access via the internet in a well-organized, comprehensible manner. The Center also hosts an annual Theodore Roosevelt Symposium as well as special Roosevelt-related events, promotes Roosevelt scholarship and offers student internships.