Posted at 14:32h in Campus Happenings by crhoades 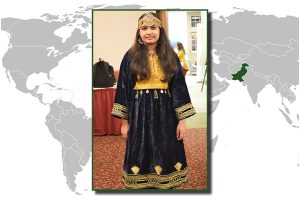 Dickinson State University (DSU) is pleased to welcome a new international student to campus as part of the U.S. Department of State’s Global Undergraduate Exchange Program in Pakistan (Global UGRAD-Pakistan).

The Global UGRAD-Pakistan program, which places participants at U.S. colleges and universities for one semester of non-degree academic study, is part of a broader U.S. Department of State effort to promote greater understanding between the people of the United States and the people of other countries, including future world leaders. Since the program’s inception in 2010, Global UGRAD-Pakistan has provided nearly 1,800 talented, highly motivated undergraduate student leaders from underserved populations across Pakistan with the opportunity to study at a U.S. college or university.

Through semester-long academic study, exploration of U.S. culture, participation in community service projects, and interactions with Americans in their host communities and campuses, Global UGRAD- Pakistan participants develop expertise in their academic fields, gain a broad and nuanced understanding of American culture and values, and go on to share this understanding of the United States with their communities when they return home. Over the past nine years, participants have volunteered over 36,000 hours of service in communities across the United States.

Global UGRAD-Pakistan participants enrich the lives of the Americans they meet by sharing their unique viewpoints and backgrounds and bringing a global perspective to their host communities. These ties endure, with over 95% of program alumni maintaining relationships with Americans they met while in the United States.

Joining the DSU campus community as part of the Global UGRAD-Pakistan program is Nida Irfan. Irfan is a social sciences major who has been busy on the DSU campus since she arrived. When she is not busy studying, she is volunteering and sharing her culture and traditions with the campus and community.

“Nida has been a fantastic addition to the International Programs Community at DSU. She has been very active in the International Club and jumps in to help and get involved at every opportunity,” said Wynter Miller, director of International Programs at DSU. “Her wit and creativity are an asset to the variety of project in which we are involved. Participating in UGRAD Pakistan has been a fantastic way for DSU to directly engage with individuals from a region that is otherwise underrepresented on our campus.”

Here are a few words from Irfan about her upbringing, life experiences and future goals:

“Kitchen is the place where a woman should reside. Education will spoil their minds.” All my life I’ve been hearing this sentence. I belong to the remote area of my country Pakistan ie Orakzai Agency and I’m the first woman from my family pursuing higher education.

Today I’m here it’s because of the support of my parents. Being denied education because of my gender in a society, my parents became a pillar for me and didn’t let me fall but instead fought society and get me enrolled in school even though it was hard for them to afford my education. But they never kept me deprived of education. With the help of them, my hard work, loans and scholarships, I never stopped moving forward.

The primary goal of my life is to be a strong independent woman, having her own organization that’ll help deprived girls in getting an education. America’s diverse society is inspiring and will be a great source of learning for me. I will try to learn all the basic skills, especially courage from exemplary American women.

In the future I’ll be truly honored to serve as an influential woman and be part of a positive and sustainable change that we have long been dreaming about in my region.

The Global Undergraduate Exchange Program in Pakistan is sponsored by the U.S. Department of State’s Bureau of Educational and Cultural Affairs (ECA) with funding provided by the U.S. Government and administered by IREX. For more information about the program, visit: https://www.irex.org/ugrad-pakistan