Posted at 17:47h in Campus Happenings by cpallai 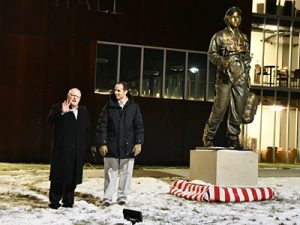 WILLISTON, N.D. – Dedicated to the men and women who have served this country, a bronze statue was unveiled on the Williston State College campus last month.

The statue is the work of American sculptor, Benjamin Victor, who creates incredibly detailed works in both clay and bronze. Victor is the only living artist to have two works in the National Statuary Hall in the United States Capitol. This is his first sculpture in North Dakota.

“This monument is meant to honor our veterans and its placement outside of Frontier Hall is purposeful,” explained Terry Olson, Executive Director of the WSC Foundation. “Frontier Hall has a significant veterans theme, made possible by gifts from Dale Livdahl, and Ardean and Coke Aafedt. Livdahl Lounge is named after Warren Livdahl who served in the United States Navy and died in WWII, and the Ready Room located on the 4th floor is dedicated to Company E of the National Guard.”

The veterans monument was funded by a gift from Rich Vestal and the WSC Foundation. It is the second bronze introduced to campus with the first being a statue of Sitting Bull, unveiled in 2011 and the work of professional sculptor, Michael Westergard.

Across campus, Clark’s Table, a 5-piece steel sculpture by celebrated Williston artist, David Njos, is displayed in a gazebo designed and completed by Tim Delorme, Welding Instructor, and Clay Sponable, Director of Campus Services, and his team. The gazebo is open Monday through Friday 8:00 a.m. to 5:00 p.m. and Saturday and Sunday from 10:00 a.m. to 4:00 p.m.

The WSC Foundation and Dr. John Miller, WSC President, approached Victor last spring and expressed the desire to reveal a monument dedicated to veterans on the same day that Medal of Honor recipient, Clinton Romesha, was to visit campus.

Victor had six months to complete the project, only four months on the clay and two on the bronze – half his usual timeframe.

“Creating a statue is usually a year process, as I prefer to have eight months on the clay and four for the bronze,” explained Victor. “This project had a faster turnaround, with lots of night hours dedicated to working the clay, but it was well worth it knowing this statue would be introduced in front of veterans, including Clinton Romesha.”

“Caleb is 6-feet tall, born in the Dakotas, an all-American kid,” emphasized Victor. “He had just turned 18 and had the right look of a young WWII airman walking out onto the airfield carrying his parachute and gloves.”

Capturing an iconic image of WWII, Victor hopes that veterans in particular, no matter the time they served, connect with the bravery showcased in the statue.

“I could see this in the eyes of those veterans present at the statue’s presentation,” reflected Victor. “To be in the presence of so many veterans and to hear Clinton Romesha’s moving speech was an honor. It all reaffirmed the effort required by so many to get this project done on time.”

The WSC Foundation has commissioned Victor to complete three other statues.

“We will introduce another three monuments across campus,” stated Olson. “One honoring the homesteaders and agriculture, another the oil industry, and the third recognizing ranching in our area.”

Each statue is meant to embody the spirit, history, and heritage of Williston, the region, and North Dakota.

The WSC Foundation is currently seeking a donor for the ranching monument.

At this time, the unveiling of the remaining three monuments is set for some time next spring.

A dedication plaque and name will be added to the veterans monument.

For more information about the veterans monument and/or the upcoming statues, please contact Terry Olson, Executive Director of the WSC Foundation, at 701.572.9275 or tolson@wscfoundation.com.