Posted at 15:43h in Campus Happenings by cpallai 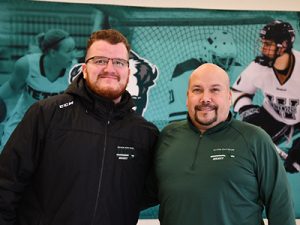 Over three years, Zabinski earned a total of 104 points for Teton Hockey often scoring up to four points in a game.

Zabinski has been playing hockey for 23 years and remembers his dad always taking him and his siblings skating at Grand Forks’ many outdoor rinks.

When asked how it felt to be named the highest scoring player, Zabinski humbly responded that while it will be nice to see his name up in the Well, he is sure someone will break the record.

“Honestly, it’s nice knowing you had an impact even if it was a down year for us,” explained Zabinski. “Teton Hockey is like a consistent family for me. I wouldn’t change my time here for the world.”

“I often tell other guys you’re here for two years, and in that two years, you have to make the most of it,” emphasized Zabinski.

Currently pursuing an Associate in Applied Science in Business Management, Zabinski ultimately wants to earn his bachelor’s in physical education with a minor in coaching.

“I plan on finishing school but will continue here at WSC for the next year to help coach and ref and pay off student loan debt as fast as possible,” explained Zabinski.

“We are kind of at a disadvantage being a two-year program playing these four-year teams,” explained Bowkus. “I feel privileged knowing we’ve won this many games despite the obstacles.”

Since Bowkus started with the program in 2013-2014, Teton Hockey has transitioned from a National Junior College Athletic Association (NJCAA) affiliated team to one in the American Collegiate Hockey Association (ACHA) division.

“These past six years have been very successful for us as we’ve gone to either regionals or nationals every year minus this one,” stated Bowkus. “While this year was frustrating with a number of injuries and players missing, we have to take the good with the bad.”

The goal for next season includes recruiting a full and strong roster of players dedicated to the sport and college.

“Knowing we will be down some players we are actively recruiting all positions,” explained Bowkus. “We will need another goalie, three or four defense men, and eight or nine forwards. We are realistically looking at 17 guys and it’s always about finding the right mixture of defense and offense.”

In addition to the American and Canadian players, Teton Hockey recruits from all around the world including New Zealand, Finland, and Germany.

“While it’s hard to see these guys go knowing you get close to them after two years, they have to move on,” said Bowkus. “It’s part of the game and like anything else, you find ways to stay connected.”

For more information on Teton Hockey and Teton Athletics, please contact Kim Wray at 701.774.4500 or kimberli.wray@willistonstate.edu.