Posted at 15:59h in Campus Happenings by crhoades 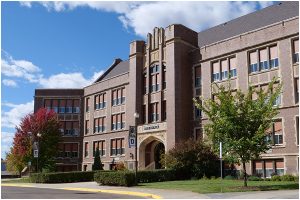 Dickinson State University (DSU) President Stephen Easton, J.D. is pleased to announce the Strategic Planning Committee members who have been asked to write the University’s next 5-year Strategic Plan.

“I am proud to introduce this group of distinguished supporters of Dickinson State University,” said Easton. “Each member of the Strategic Planning Committee believes in Dickinson State and understands the transformative power of education.”

Dr. Kathleen Geisen, director of special projects at DSU and chairperson of the Strategic Planning Committee, commented, “Dickinson State University provides quality teaching, mentoring, research and scholarship, and co-curricular and engagement opportunities that empower our students to excel. We have remarkable momentum right now, and the collaborative work of the committee can serve to guide and strengthen DSU’s mission and vision for the future.”

Strategic planning is a way to set overarching goals for the University and develop a plan to meet those goals. The committee members will consider the University’s longer-term priorities and will be meeting on a regular basis in order to complete the plan prior to the next academic year.

Dr. Joan Aus is currently chair of the School of Education as well as the director of graduate programs at DSU. Prior to coming to Dickinson State, she served as the assistant dean and chair of the School of Education at Valley City State University. Her fields of specialty are English Language Learner (ELL) pedagogical methods as well as multicultural education, and her areas of research include monolingual English and bilingual instruction for ELLs. Her doctorate is in education with a concentration in ELL education and she holds a national TESOL (Teaching English to Speakers of Other Languages) certification. In addition to teaching in higher education, Aus was also an instructor in the Army National Guard and holds Air Force and Army specialty codes in diesel power generation, refrigeration, logistics and missile maintenance technology.

Dr. Debora Dragseth, the University’s provost and vice president of academic affairs, began teaching at Dickinson State in 1989. She is a tenured professor of business, the former director of Dickinson State University’s Theodore Roosevelt Honors Leadership Program, and the former chair of the Department of Business and Management. Dragseth received a bachelor’s degree in business administration and English literature from Dakota State University, a master’s degree in business administration from the University of South Dakota, and a doctorate in educational leadership and strategy from the University of Nebraska.

Stephen Easton was named the 13th president of Dickinson State University in 2020. He graduated from DSU in 1980 with a bachelor’s degree in accounting and a minor in business administration and was the third generation of his family to choose Dickinson State. After earning his undergraduate degree at DSU, Easton enrolled in Stanford Law School where he earned his Juris Doctorate in 1983. He practiced law for almost 20 years before returning to higher education as a professor and administrator.

Dr. Kathleen Geisen is the director of special projects at Dickinson State University. She has worked at DSU for three years. Geisen holds a bachelor’s degree in social ecology, a master’s of education in curriculum, instruction and assessment, a master’s degree in business administration, and a doctorate in organizational leadership.

Tim Kessel is returning to Dickinson State University as an instructor of business and finance for the School of Business and Entrepreneurship. He has taught in various capacities for DSU on-and-off since 1997, with 21 years of service to the institution. Kessel holds an associate degree from the North Dakota State College of Science, a bachelor’s degree from Dickinson State University and is currently pursuing a master’s of entrepreneurship at DSU. He has also completed master’s-level coursework at the University of North Dakota.

Mike Lefor is a member of the North Dakota House of Representatives who graduated from Dickinson State University in 1980. Lefor has served as the president of Blackridge Enterprises, LLC and DCI Credit Services, Inc. Lefor served on the Dickinson Park Board from 1986-2014 and was president of the board from 2006-2014. He was also a part of the Dickinson Planning and Zoning Commission from 1988-2003. He was chairman of that commission from 1993-2003. Lefor also served as chairman of the board for CHI St. Joseph’s Health from 2008-2014.

Dr. Holly McBee is the dean of the College of Arts and Sciences, director of the Theodore Roosevelt Honors Leadership Program and a professor of English at DSU. She has also previously served as chair of the Department of Language and Literature. McBee began teaching at DSU in 2008 and has taught a wide range of courses, including composition, literature, literary theory and leadership. She holds a master’s degree from New Mexico State University and a doctorate in English literature from Purdue University.

Lucy Meyer began her teaching career as a clinical adjunct nursing faculty member at Dickinson State University in 2005. From fall 2006 to 2016, Meyer served as an assistant professor of nursing and, since fall 2017, has held the position of associate professor of nursing at DSU. Meyer earned a Bachelor of Science in nursing from Dickinson State University and a Master of Science in nurse specialization education from the University of North Dakota.

Scott Molander graduated from Dickinson State University in 1988 with a bachelor’s degree in business administration and management. He was the chief operating officer of LIDS Sports Group from 1995 until January 2016. Molander is the current CEO at ASB Sports and is serving on the DSU Heritage Foundation Board.

Dave Moody is a 31-year veteran of DSU. For 18 years, he coached the women’s volleyball team to national prominence winning the school’s first team national championship in 2000. He was inducted into the National Hall of Fame in 2010. In 2007, he resigned from his coaching position to pursue teaching full-time as a tenured faculty member in the Department of Health and Physical Education. He is a past president of NDSHAPE and the NAIA Volleyball Coaches Association. He currently serves at DSU as the Faculty Senate President and as an assistant professor of health and physical education.

Deb Nelson is the founder and president of DLN Consulting. She earned a Bachelor of Science from Minot State University in the social and political sciences and has extensive master’s-level training from North Dakota State University in education and public administration. She has over 25 years of experience in public relations, strategic planning and grant writing. She has served as a lecturer and presenter at various national, state and local conferences. Nelson has also served as the principal administrator for several research-based studies for state and federal agencies. Nelson administers the Vision West ND Consortium, which represents 19 energy producing counties in western North Dakota. Vision West ND’s goal is to help create initiatives that promote community sustainability beyond the energy and agricultural commodity industries. She has served on several nonprofit boards of directors in North Dakota.

Thadd O’Donnell is the chair of the Department of Health and Physical Education, an assistant professor of health and physical education, and is DSU’s head golf coach. O’Donnell began his teaching and coaching career at Dickinson State in 1994. In his tenure he has coached wrestling, football, cross country and golf while teaching in the Department of Health and Physical Education for Dickinson State University. He graduated from DSU with a Bachelor of Science in mathematics and physical education with a minor in coaching and driver’s education. He later went on to attend Northern State University where he received his Master of Science in Arts in education and physical education.

Stephanie Schendel is a senior at Dickinson State University. Schendel serves on Student Senate and is pursuing a bachelor’s degree in biology – pre-medical science option and a minor in business administration. She is from Wilton, Wisconsin, and plans to graduate from DSU in spring 2022.

Dr. George Seror, III serves as an assistant professor of psychology at Dickinson State University where he teaches courses in learning and memory, research methods and statistics, lifespan development, theories of personality and the history of psychology. Seror earned a bachelor’s degree in music and psychology and a master’s and doctorate in cognitive psychology. He also holds associate degrees in classical guitar performance and music business.

Colby Wartman is a graduate of Dickinson State University with a bachelor’s in exercise science and a minor in coaching and leadership. He was a member of the DSU football team and a Theodore Roosevelt Honors Leadership Program scholar. Wartman owns a local gym, The Iron Chapel, and is a certified strength and conditioning coach. He is also a graduate assistant in the Athletic Department at DSU while he continues to pursue his education at the University.