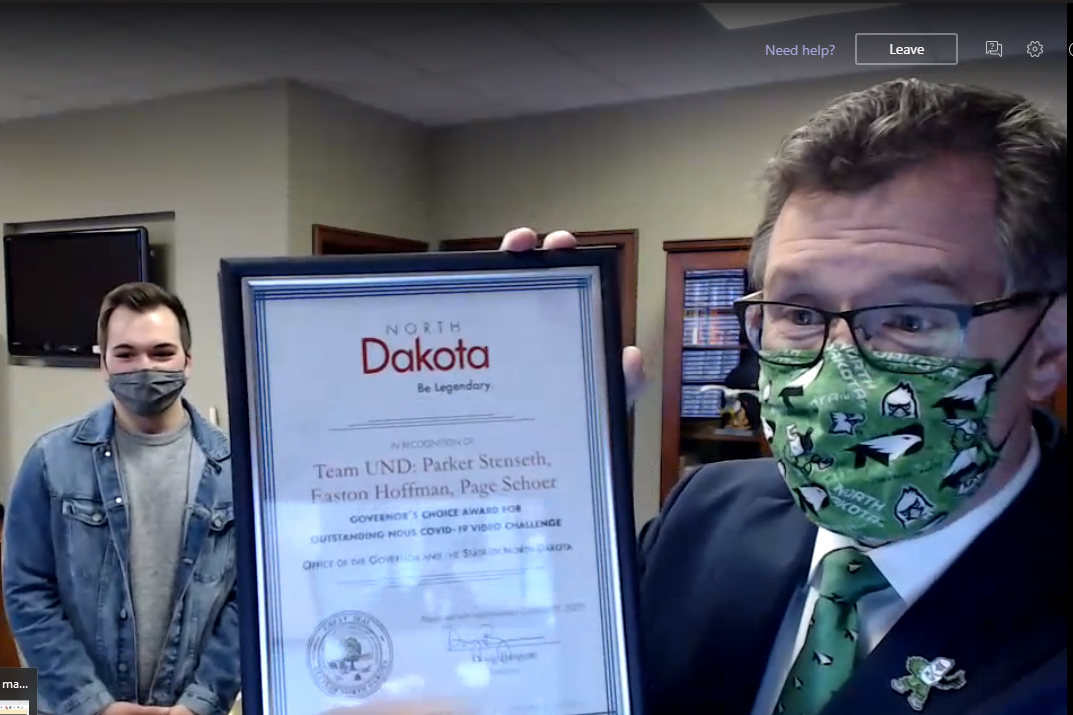 Posted at 14:56h in News and Media by Chris Erickson

The State Board of Higher Education met this week with a continued focus on its response to the novel coronavirus (COVID-19) pandemic. COVID-19 related topics included an update from Dr. Joshua Wynne, the dean of the University of North Dakota’s School of Medicine and Health Sciences and the leader of the North Dakota University System Smart Restart Task Force; and congratulates to students who had participated in a recent COVID-19 video contest.

Wynne noted that he was pleased that the recommendations and guidelines had helped the colleges and universities stay open and providing the education students needed. He noted that so far there had been 2,500 positive test results, 2,200 recoveries, and to the best of his knowledge, zero hospitalizations or deaths.

Wynne noted that although there had been a dip in cases in early October, a rise in cases in late October had been parallel to the rise in cases in the state. Some institutions were experiencing an upward trend at the moment. He said this was not unexpected, given interaction between campuses and communities.

He added that exercising better control over the pandemic on the campuses would mean continued contact tracing for the university system. He said that enhanced testing with upcoming antigen tests could help alleviate further spread at the campus level.

Student Member of the Board Erica Solberg then recognized UND students Page Schoer, Easton Hoffman, and Parker Stenseth for their winning submission in the #COVIDChallenge video contest. The team’s winning entry was one of a dozen that was submitted by students throughout NDUS, all of which focused on how students were approaching going back to school during a pandemic. For their winning entry, the students each received a letter of recognition from Chancellor Mark Hagerott, a certificate of excellence and $250 check from the NDUS Foundation. They were also recognized by Gov. Burgum with his “Governor’s Choice” honor. The meeting then played the video for the Board and audience.

Following that typical Board business, Vice Chancellor of Administrative Affairs Tammy Dolan and Director of Human Resources Jane Grinde provided recommendations on the NDUS Retirement Plan Administration. Hagerott then brought up the topic of a potential Williston State College presidential search in response to WSC President John Miller’s recent announcement that he would retire next June. The board voted to authorize Hagerott to begin the presidential search.

Jill Louters, Ed.D brought forward the Academic and Student Affairs committee recommendation, noting that business was relatively light at the last meeting and included the policies the board had heard. She noted that they had looked at behavioral health programs and how those programs were ensuring students had access to their services during the pandemic. She noted that campus surveys would be administered with results expected after the semester break. The surveys would help ensure that students’ needs were being met.

Board member Kathleen Neset brought forward the Research and Governance committee business, which included presentations from UND and North Dakota State University. Neset said the presentations proved that collaboration between the two research universities was ongoing on topics of autonomous vehicles and unmanned aerial vehicles.

Hagerott spoke next to the Board on the topic of cybersecurity and computer science, noting that the NDUS Dakota Digital Academy project run by Ken Nygard, former dean of computer science at NDSU, could help address those things in the state. Nygard walked the Board through what Dakota Digital Academy could do for the system, including building certificate “stackability,” increasing research, and facilitating more collaborations with K-12.

Vice Chancellor of Information Technology and Chief Information Officer Darin King brought up the implementation of advanced desktop protection, a form of information security being put in place to protect the digital landscape within higher education. Information Security Officer Brad Miller spoke about how the university system was working to meet those ends in the state. He added that a large part of the initiative would be to protect, detect and respond to any cyber threats throughout the system’s end-point systems.

Dolan spoke to the Board about the upcoming legislative session, noting that some uncertainty still existed for how the session was going to happen during the pandemic. She added that legislative management was trying to keep things as open as possible to help facilitate both face-to-face and online options. She said that there would be no allotments for this biennium, which alleviated some stress. Dolan added that revenue reductions could still occur but might not be as dramatic as initially predicted.

Solberg then provided an update from the North Dakota Student Association, noting that numerous activities and programs were continuing, but COVID fatigue had been setting in at the campus level. She added that NDSA had its regular meetings and keeping members as informed as possible.

Faculty Advisor to the Board Elizabeth Legerski, Ph.D, provided an update from the Council of College Faculty, thanking the Board for acknowledging the work of faculty across the system. She said that CCF met recently and talked of COVID but had generally settled into the fall semester. She noted that faculty was happy that the Board was pushing for a needs-based budget.

Staff Advisor to the Board Retha Mattern provided an update from Staff Senate, which included campus updates posted to a new staff senate website. She noted that staff senate would be monitoring and being involved with legislative session. Mattern noted that retaining employees through the pandemic and beyond was of a high concern.

The next meeting is scheduled for Dec. 17.