Posted at 20:31h in Campus Happenings by crhoades 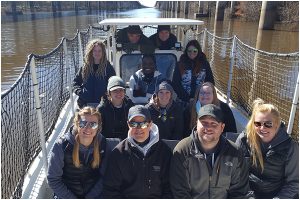 While the most influential moments in a student’s life may come from classroom discussion or instruction, the memories that last the longest are often grounded in experiences that happen outside the classroom. Dickinson State University’s (DSU) Science and Range Clubs left their classrooms and the cold weather behind last month to travel the Gulf Coast studying coastal and swamp ecology and touring local ranches and farms. Their adventure took them through Louisiana and Texas Jan. 15-23, 2021, and included stops in rural areas as well as cities, like Corpus Christi and New Orleans.

The tour group was comprised of nine students who were accompanied by Dr. Paul Barnhart, associate professor of biology and advisor to the Science Club, and Dr. Josh Steffan, associate professor of agriculture, microbiology and soil biology and advisor to the Range Club. The group gathered early Friday morning at Murphy Hall on the DSU campus before climbing into a van and setting out on the first leg of their adventure: a short drive to the Dickinson Theodore Roosevelt Regional Airport. They anxiously boarded their 7 a.m. flight, had a four-hour layover in Denver, Colorado, and landed in Houston, Texas, that evening. The group jumped off the plane, gathered their luggage, and piled into another van. From there, they drove east, stopping for a bite at a local Cajun restaurant before crossing into Louisiana to find lodging.

During their first full day in the state, the group took an informative tour of the largest wetland and swamp in the United States, the Atchafalaya Basin, which is a combination of wetlands and river delta where the Atchafalaya River and the Gulf of Mexico converge. After the tour, they drove for about three hours to their next destination: the “Big Easy.”

New Orleans was one of many highlights for organismal biology major Lexee Craig. “We hung out on the main street, which is Bourbon Street, of New Orleans and got to look around and play ‘tourist’ for the day. Bourbon Street is kind of a miniature [Las] Vegas. It was fun!”

The group’s time in New Orleans took them to many different spots, from museums and plantations to graveyards and voodoo shops. “We took our own tour of an old graveyard,” said Craig. “It was really interesting! I think we found one grave that was placed in about 1860 or so… We talked a lot about the water table, because all of the graves are above-ground. They can’t have anything underground because they’re about a foot above sea level. They have huge family graves where they put all of the members in the same tomb. It was very interesting to see a bit of the history.”

Craig also enjoyed visiting the World War II museum in New Orleans. “It was amazing! It wasn’t as science-related, but I definitely learned a lot! …It’s the type of museum where you need three days to see everything.”

The group also took the time to visit a few aquariums during their trip. “We walked through the aquariums, and they are in order of your most basic lifeforms that you’re going to see in the oceans all the way up… And, in zoology and evolution [classes], we went through some of those same stages between terrestrial and aquatic.”

Before heading home, the group piled back into their van and drove to Corpus Christi, Texas. The students split up into two groups in order to visit two different sites. The Range Club traveled to King Ranch in Kingsville, Texas. The Ranch encompasses 825,000 acres of land, an area larger than the state of Rhode Island. The Science Club, including Craig, headed to the beach. They looked for seashells and discussed erosion while digging their feet deep into the sand and watching the water move the particles of sand around. Craig is from Wyoming, so we can imagine a beach day is a welcome change from what she’s used to!

In addition to being a pole vaulter for the Blue Hawk track and field team, Craig has served as an officer for the Science Club for the last three years and has helped her classmates organize fundraisers for trips like this one. For Craig, being a part of the Science Club is like being a part of a family: each member helps the others become the best versions of themselves. “The Science Club itself has made me a better student, because I’m around all the other biology and chemistry students,” said Craig. “Just being a part of the group and being able to go and do things together, it makes a huge difference on how you are able to get through school… Being in those clubs gives you that different perspective.”