Posted at 15:54h in Campus Happenings by crhoades 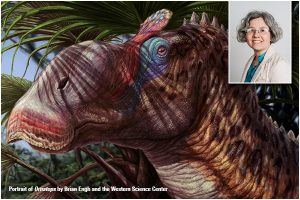 Paleontologists have discovered a new species of duck-billed dinosaur that is an evolutionary “missing link” between known species. Freedman Fowler was part of a multi-institutional collaboration led by Dr. Andrew McDonald of the Western Science Center in Southern California. The new species, Ornatops incantatus, was found in the Menefee Formation of New Mexico, a layer of rocks approximately 79 million years old. Ornatops is hypothesized to be a transitional species between Probrachylophosaurus bergei (named by Freedman Fowler in 2015) and Brachylophosaurus canadensis, showing the gradual evolution of the display crest on the top of the skull.

“When Dr. McDonald told me about this new skull he had discovered, I was very excited to join the research team, because the fossil was so similar to the Probrachylophosaurus that I had named with my doctoral advisor, Dr. Jack Horner,” said Freedman Fowler. “The display crest on top of the skull would have been a perfect evolutionary intermediate between Probrachylophosaurus and Brachylophosaurus. For every evolutionary gap between two species, we hope to eventually find a new fossil to fill that gap, and Ornatops does that beautifully.”

The article, co-authored by Freedman Fowler, is available here. Digital 3D models of the fossils are available for viewing on SketchFab; search for “Ornatops incantatus.”