Posted at 18:56h in Campus Happenings by crhoades 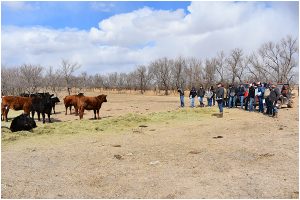 Dickinson State University’s (DSU) livestock production class recently took their learning out of the classroom to James and Leona Odermann’s organic ranch near Belfield, North Dakota. The class, led by Toby Stroh, assistant professor of agriculture, takes several study tours throughout the semester, and this was their first time to the Odermann property. DSU President Steve Easton accompanied the students, taking the opportunity to learn more about ranching in Southwestern North Dakota.

Stroh applauded the Odermanns for providing a high quality, educational experience for his students while they were on-site. “They provided a handout, they were organized and had a timeline… They really did an exceptional job,” said Stroh of their hosts. “They provided a data sheet with the last 20 years of their daytime and nighttime calving. Their philosophy is that they feed at night so that the calves are born during the day. In their experience, it helps a lot; it works for them.”

DSU student Jacob Jessen was very intrigued by the Odermanns’ unique management practices. “They were talking about their heterosis, which is using different breeds to get better genetics within their livestock herds. Also, what I found really interesting was their daytime calving. They feed toward nighttime, so hopefully they’ll calve during the day, which is something that’s really helpful since we live in a very cold place.”

“They also went through some of their feeding programs,” added student Hannah LaBree. “Being organic, they have to get feed through organic producers for their meat to be certified organic, too, so that was kind of neat.”

President Easton appreciated being able to meet local ranchers, especially those with strong ties to the region and the University itself. “We had a wonderful visit to the ranch owned by two loyal DSU alums, Mr. and Mrs. Odermann,” he said. “I know I learned a lot about organic ranching, about breeding of bison into a cattle herd, effective grazing, and much more. Though the students were more knowledgeable than me about these matters, it was clear that they learned a lot about them, too. It was, quite simply, a great afternoon. I feel privileged to have been included.”