Posted at 23:27h in Campus Happenings by sloveland 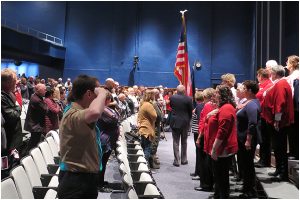 On the eleventh hour of the eleventh day of the eleventh month 103 years ago, an armistice, or temporary cessation of hostilities, between the World War I Allied nations and Germany went into effect. This year, Dickinson State University (DSU) was proud to host the Veterans Day Ceremony once again at 11 a.m. Nov. 11, 2021, to honor United States military veterans.

DSU is a military-friendly university and recognized as such. “With veterans on staff and veterans who are students, it makes sense to have the Veterans Day Ceremony at the largest institution in the city,” said Richard Brauhn, master of ceremonies, vice commander Legion Post #3 and veteran, who served the DSU Blue Hawk family for over 20 years as vice president of academic affairs, interim president, and dean of arts and sciences. Brauhn holds the distinction of professor emeritus of history at Dickinson State.

Before the program started, veterans in the audience received cards made by local school children thanking them for their service.

Veteran Brian Benesh was the guest speaker. He volunteered for military service in 1969 and toured in Vietnam from 1969-70 as a dust-off medic. A dust-off is a helicopter that takes the wounded from combat fields to places of triage then to hospitals. His dust-off unit achieved a 98% survival rate from combat zones to major base hospitals.

Benesh is a member of the Disabled American Veterans, Vietnam Veterans of America, Association of Medics and Corpsmen, and Vietnam Dust-Off Association. He is also a lifetime advocate of remembering and honoring all veterans at Dickinson, New Hradec, and South Heart cemeteries; he’s the person responsible for putting all the American flags on the graves on Memorial Day.

Benesh spoke of the declining number of veterans and active-duty personnel and the positive shift in attitudes of the public towards veterans. He then recognized veterans and family members of veterans in attendance. “You veterans have made your mark,” said Benesh. “You have made the world a better place in which to live.” He closed with a quote from President Ronald Regan, “Some people live an entire lifetime and wonder if they have ever made a difference in the world. A veteran doesn’t have that problem.”

Benesh also gave the POW/MIA presentation. He drew attention to the black and white POW/MIA flag draped over an empty chair on stage in honor of those who are unaccounted for, encouraged attendees to always remember the 83,000 Americans who will never come home, and concluded with a moment of silence for those who were lost.

The ceremony ended with veterans lining up in the blowing snow outside DSU’s Stickney Auditorium for a rifle salute while a single trumpet played Taps from the balcony.

Richard Brauhn, who served in the Vietnam War, was not only the master of ceremonies, but he has also organized the Veterans Day and Memorial Day affairs for the last 15 years. “Veterans played a very important role in the history of [Dickinson State],” said Brauhn. “During WWII, Klienfelter Hall was designated a naval training institution,” and he pointed out that Pierre Salinger, who served as the ninth press secretary for United States Presidents John F. Kennedy and Lyndon B. Johnson, trained here.

He also shared a more recent military connection. “It’s probably not well known, but one of our students was activated to fly her jet in patrol of Washington D.C. during the 9/11 situation; she was a DSU graduate.”

“As a former member of DSU, and I know President Easton shares this view also, that he’s proud that the University is able to serve as a venue for this ceremony,” said Brauhn.

After a brief intermission, Bismarck’s Missouri River Quilts of Valor group, whose mission is to provide comforting and healing quilts of valor to veterans and service members who have been touched by war and to say thank you, awarded quilts to the following Dickinson veterans:

The national Quilts of Valor (QOV) Foundation was started in 2003 by Catherine Roberts of Delaware whose son was serving in Iraq, and it now has over 10,000 members participating in more than 600 QOV groups in all 50 states. As of Oct. 31, 2021, QOV has awarded a total of 286,178 quilts, all handmade by volunteers.

The Bismarck group started February 2020 and has awarded 148 quilts in less than 18 months.